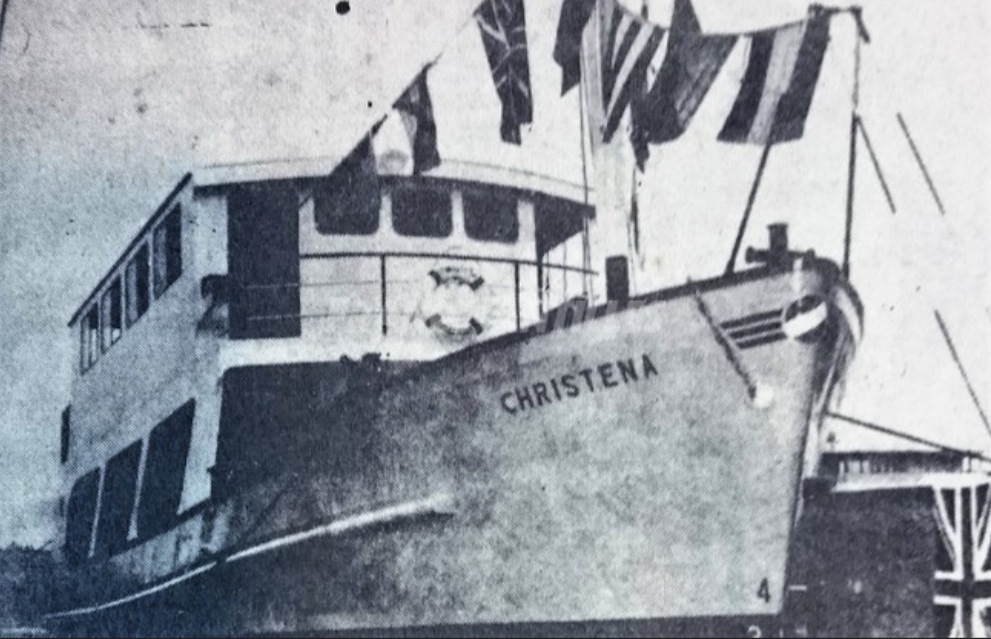 August 1 2020 is a sad but special anniversary in the Caribbean. Particularly for the people of St Kitts and Nevis, those memories are still vibrant and very painful. They continue to bring tears.

Fifty years ago today, the crowded ferry Christena was crossing from St Kitts to Nevis, when it sank suddenly just about 4pm. Almost 250 children and adults died that afternoon, including Captain Ponteen who could not swim.

The incident is probably the second most devastating boating tragedy in contemporary Caribbean history. Most of the people who died that afternoon were women from Nevis. Many of them went to St Kitts to sell vegetables, purchase clothing, visit family, or to obtain travel documents.

The ferry should have arrived in Nevis by 4.30pm. News about the sinking did not get to the islands until almost 5pm when bodies of dead females started to arrive on Nevis. The fishing boat, Sea Hunter 1, was alerted by another boat, and went to the rescue.

Memories of the sights and scenes on Nevis that evening are still painful to Nevisians. That was a night when almost everyone on the island cried.

St Kitts and Nevis are among the former British colonies, which continue to celebrate the abolition of slavery in the British Caribbean islands on Monday August 1 1838.
August 1 1970 was a Saturday but everything was in place for the celebration on Monday August 3. That included horse-races at Indian Castle.

Nevisians were on their way home from England, the US Virgin Islands, and elsewhere. Kittitians were travelling to Nevis for the fun too.

Teachers were on board, visitors were on board, including three nuns, and the regular hucksters. That afternoon more women than men were aboard the ferry. Ms Dulcita Browne had five of her children with her. The rushing water took them from her arms. She survived and helped another lady she saw in the water. They held on to a crocas-bag containing some breadfruit.

A group of excellent swimmers were in the captain’s room having a birthday party. With the sudden sinking they died there.

Months later, their skeletons were seen in the captain’s room on the sunken ferry. Two of the women who died were hucksters in their late 30s. Each left eight young children to be cared for, while another mother left nine children behind.

More people died than those who survived. The sudden terror of being thrown into the water, then the calm endurance required to swim ashore, almost one mile away, was a bridge too far, for many passengers.

There were loud deafening shouts of fear and distress. Then, some died alone, others together, as people sank into the sea. There was some cooperation among some of the swimmers, but it was more a matter of each person for him/herself.

Each survivor has a fascinating story about how it happened. Arrington Browne was a carpentry apprentice, but he was into spear fishing too. For Arrington, once he managed to get from the ferry into the water, there was no problem.

He was so comfortable doing the swim that Arrington swam with his shoes on. He did not lose anything in his hands or pockets. Years later when I wanted a team to swim the channel between the islands, and to swim the eight miles from Nags Head to Basseterre, Arrington was one of my picks for those swims.

Franklyn Browne was my fourth grade teacher. Once he found himself in the water, he went in search of his son Roger. Both Mr Browne and his son survived. He also managed to assist another young boy in staying alive.

The calypsonian was not a swimmer, but as he floated in the water some foam for a bed drifted toward him. He held on for dear life until he was rescued.

Oswald was 14 years old. He remembers swimming from one floating dead female body to another, while repeating the words of Psalm 107. Eventually he was picked up by one of the rescue boats.

Malcolm Simmonds was a young teacher. He was invited to join the birthday party, but he was comfortable outside.

Once he struck the water, there was no problem. He was a strong swimmer.

At the time of the accident, Livingstone Sargeant was one of the best young cricketers in the Leeward Islands, and well known, but a poor swimmer. A number of other swimmers helped Sargeant to survive. The experience was so terrifying that until recently, Sargeant was too uncomfortable to speak about how he survived that afternoon.

The Christena incident changed the lives of Nevisians in a number of ways. There was a drop in the island’s population for many years. The young women and young men who died, did not have an opportunity to contribute to the population.

Further, many people who were left without parents were invited to migrate and live away from Nevis. The struggle between St Kitts and Nevis over fair treatment became more aggressive. Nevisians continued to demand separation from St Kitts.

Within two months of the accident, Nevisians organised a new political party and were increasing with their defiance against the government on St Kitts.

Ferry travel between the islands has become safer, more often, and more in the control of private entrepreneurs. Nevis remains in association with St Kitts, but its politicians have argued for, and demanded, much more autonomy than it had since 1893, the last time Nevis had its own legislature.

The local Nevis legislature was reestablished in 1993. Nevisians were not very happy to be part of the St Kitts Christmas Carnival.

About 1974, Nevisians started their own cultural ceremony, separate from that of St Kitts, and called it Culturama, a product of the island’s efforts at local dramatic and cultural development.

Since the tragedy, Nevisians, more than Kittitians, have been faithful in remembering and celebrating the Christena tragedy every August 1. Two Christena monuments have been constructed on Nevis, but to date, none on St Kitts.

After the tragedy and the loss of so many hucksters, the plant, vegetables and animal trade between the islands never returned to the vibrancy it knew back in 1970 and prior years.

There has also been an increase in the number of Kittitians who now visit Nevis. In 1970, when the ferry sank, Nevis was borrowing doctors from St. Kitts That situation has changed now.

For August 1 2020, an effort is ongoing to have very special celebratory events on St Kitts-Nevis: The Christena Disaster – 50 Years On, to revisit and memorialise the Christena’s sinking.

This is due to the effort of patriotic people, including Stevenson Manners, Sonny Skeete, Almon Dasent, Clive Bacchus, and CJ Warner. The intent is to pause normal activities on both St Kitts and Nevis, and to remember the Christena tragedy.

Admittedly, even today pain is still there. It has not all gone away. There are children who never knew a parent. Parents who continue to miss children. And many people who are probably still searching for answers to that ‘why’ question, about August 1 1970.

However, it is also a good time for us who know and remember, to pause and say to the next generation, here is a story of pain and death which demolished our islands. It is a story that you should know and not forget.

After fifty years, we are sharing it with you. Accept the opportunity to understand and know more about this story and what it did cost our islands. Knowing about the past can help someone survive into the future.