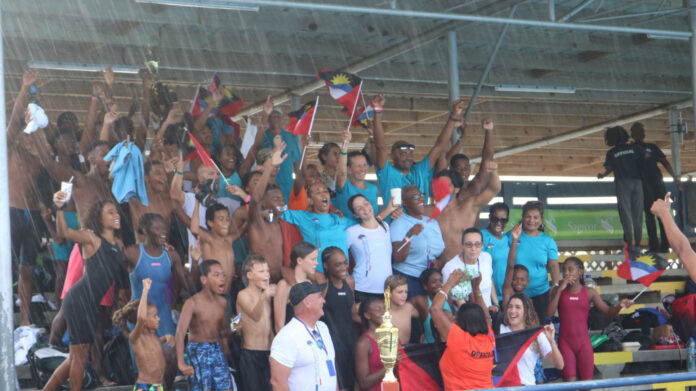 Team Antigua and Barbuda amassed a combined total of 1,111 points to clinch the 2022 OECS Swimming Championships ahead of hosts St Lucia at the Rodney Heights Aquatic Centre in Gros Islet over the weekend.

It was a historic triumph for Antigua and Barbuda as it marked the first time in the championships’ 30 years of existence that the twin-island state has lifted the main trophy.

The St Lucia National team finished second with 1,018 points while Grenada grabbed bronze with 956.50 points. St Vincent and the Grenadines amassed 841 points in fourth position with St Kitts & Nevis in fifth with 61 points and St Maarten finishing sixth with 5.50 points.

There were outstanding individual performances for Antigua and Barbuda throughout the championships.

In the boys’ equivalent, Zane Williams dominated his age group to come away with multiple gold medals and the high-points trophy, while in the girls’ 9-10, Anya DeGannes won the overall high-points trophy while also setting two OECS records.

Team Antigua and Barbuda had gotten off to a winning start on the event’s opening day with gold medals in the girls 8 and under from Warner, who also set a new age group record in the 100 meter freestyle for both the OECS and Antigua.

There was gold and silver for Williams and Christopher Walter respectively in the boys 8 and under category in the 100 freestyle.

There was a top finish as well for DeGannes in the girls 9 -10 age group of the 400 meters freestyle.