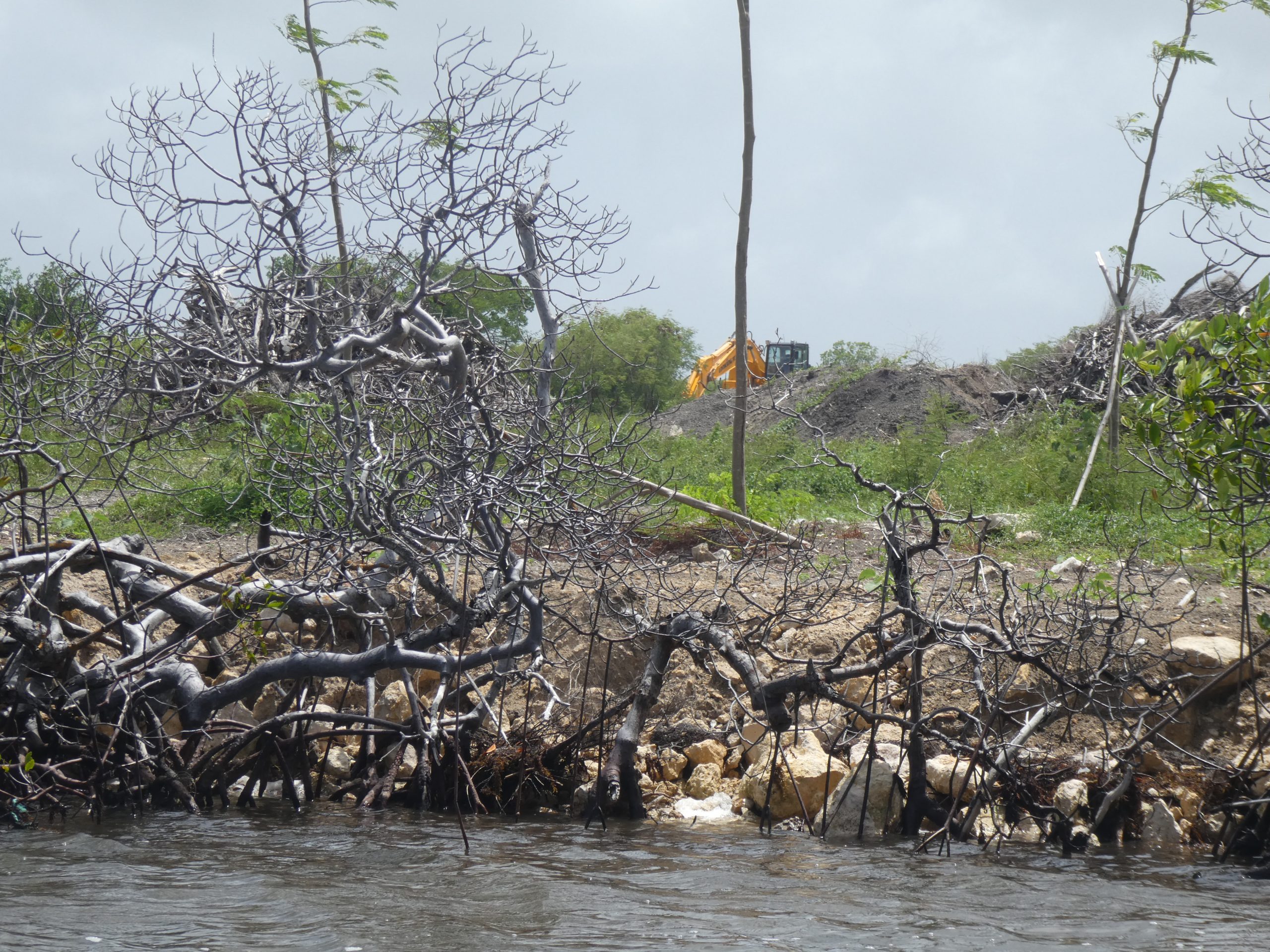 An investigation of the Antigua and Barbuda Special Economic Zone (ABSEZ) has brought to the fore the scale of the changes that are already occurring with the construction of the two-billion  dollar development.

A six month long investigation revealed just how the government of Antigua and Barbuda has been subverting the laws to accommodate the more than 2,000 acre state-of-the-art city.

The overall development which includes four offshore islands, is large enough to take up almost three percent of Antigua and its completion is anticipated to take up to twenty years.

It all began in 2015, when a memorandum of understanding was signed between Chinese developer, Yida Zhang and the government of Antigua and Barbuda that permitted Zhang to create his very own city, funded and supported by international investors.

The Fisheries Division and the Department of the Environment (DOE) initially raised alarms about the scope of the project, which includes constructing several marinas, six and seven-star hotels, factories and entire communities on the offshore islands.

They said that the development threatened to significantly pollute and negatively alter the marine environment and the species that live within the North East Marine Management Area (NEMMA) where most of the changes will take place.

Already, the investigation noted, several laws and regulations have been breached since work began. In just five years, the YIDA Group has been flagged for operating without an Environmental Impact Assessment (EIA), altering wetlands, removing mangroves and mining sand and limestone without permission.

Aided by special clauses in law, the government has been able to sanction some of the abuses by not strictly enforcing the law and waiving certain provisions.

For example, months after the ground-breaking, the YIDA Group began clearing lands on Crabbs Peninsula and dredging the channel between the Narrows and Guiana Island without an EIA.

The Development Control Authority (DCA) issued a stop order, but the developer was not made to compensate for the breaches which carry, in most cases, thousand-dollar fines.

It seemed that all was forgiven, because in August 2017, the DCA finally gave the developer permission to begin work on the Crabbs site in Antigua.

Approval was permitted on the condition that the project be monitored by the fisheries and the environment departments, and on the condition that YIDA preserves the NEMMA, including the mangroves. Numerous mangrove forests have since been either removed or are dying as a result of construction work at Crabbs.

Miles of fencing have also been erected around the perimeter of Crabbs, blocking traditional landward access to the sea for local fishermen and sea bathers – none of whom are allowed inside the zone without authorisation.

Plans for the SEZ include a deep-sea fishing business which requires a special coast guard body. The government’s share of the profits is 10 percent of sales. However, small-scale fishermen fear that such a project could put them out of business.

Farmers too, have been affected by construction work at Crabbs. Between 2018 and 2019 farmers reported losing thousands of dollars, as enormous amounts of dust from the quarry stifled their crops. There was no restitution offered to those farmers.

Meanwhile, disturbance of the environment has only continued. For example, in October 2019, the YIDA Group was found to be in violation of the Environmental Protection Act and the Beaches Act, when its machine operators were discovered dredging sand off Maiden Island. This was reportedly to construct two man-made beaches on Crabbs Peninsula.

The illegal activity was made public by whistle-blower, George Wehner, who posted photos to social media that showed workmen dredging the shipping channel west of Maiden Island – even after expressly being warned by the Fisheries Department not to veer off the permitted course.

Less than a year later, in July 2020, the DOE stopped the developer from continuing work at its quarry, when it found that workers had been mining limestone without application or approval from the DCA.

That same month, the DOE reported in a leaked document that 90 percent of the mangroves that bordered Yida’s Crabbs site had been removed.

But as a part of approval to begin preparatory work on the site, the developer was advised early on by the Fisheries Division to keep a vegetation buffer on the coastline.

The investigation confirmed that only flamboyant trees now stand where mangroves once were on the coastline of Crabbs Peninsula.

This project is being undertaken even though Antigua and Barbuda is a signatory to the United Nations Framework Convention on Climate Change (UNFCCC) where we’ve pledged to protect wetlands, watershed areas and endangered species. We have also pledged reduce greenhouse gas emissions by the year 2030.

The government agencies responsible for monitoring the SEZ have been tight-lipped since 2019, when the Cabinet took an executive decision to enforce the Civil Service Regulations that prevent public officers from speaking to the press without written approval.

Instead of being guided by the laws put in place by previous administrations, the current Antigua Barbuda Labour Party (ABLP) administration has said that developments in sensitive areas should be balanced against economic benefit.

Meanwhile, the hundreds of local jobs promised in the initial stages of this project have not materialised.

Future plans for the YIDA Group include the construction of marinas that will link the offshore islands – Guiana Island, Maiden Island, Crump Island and Rabbit Island.

In 2012, the United Progressive Party administration specified how the lands there should be used by agreeing to establish a Sustainable Island Resource Management Zoning Plan (SIRZP).

In the zoning plan, coral reefs, seagrass beds, mangroves and wetlands are all categorised as “Critical Environment Areas” where development must be strictly guided. Guiana Island was also listed as being  under environmental protection. It had also been marked as a turtle nesting area.

The zone is now open to foreign investments that will complete the 20-year development. The ports of entry will transport thousands of residents who will live and work inside the permanent tax-free zone.

According to the license order granted to the YIDA Group, the zone will be free of all taxes levied in Antigua and Barbuda, and it will enjoy new concessions granted to developers outside the zone for the lifetime of the development.

Residents in the zone will also possess Antigua and Barbuda passports – the first 500 applicants are in line to receive a discount on the price of citizenship.