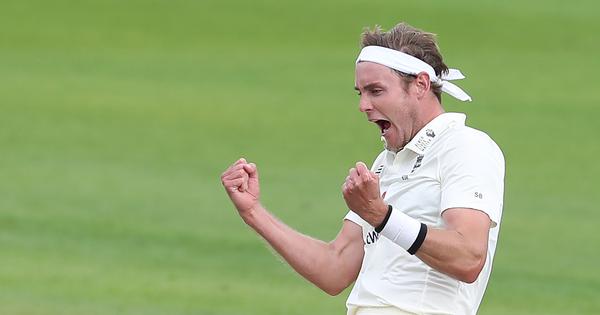 Stuart Broad’s six wickets left England on the verge of a series victory over West Indies on the third day of the deciding Test at Emirates Old Trafford.

Broad took all of the West Indies wickets to fall across two innings, starting with four in four overs for 6-31 in the first. The tourists were all out for 197, 172 behind.

Late in the day, with Jason Holder’s side set a nominal 399 to win, the brilliant Broad struck twice more, leaving West Indies 10-2.

He is poised on 499 Test wickets, one away from becoming only the fourth pace bowler to reach 500.

England’s lead had been extended first by an opening stand of 114 between Rory Burns and Dom Sibley, who made 56.

The arrival of captain Joe Root was the signal to accelerate, with the hosts mindful of a forecast predicting that rain will heavily disrupt Monday’s play.

When Burns top-edged a sweep to fall 10 runs short of his third Test century, it was the signal for England to declare on 226-2. (BBC Sport)