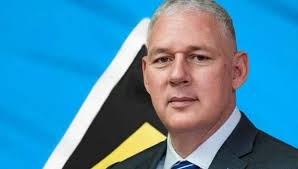 (SNO) – The Prime Minister of Saint Lucia, Hon. Allen M. Chastanet, addressed the nation on Sunday, March 29 to announce the enforcement of more stringent measures to help curb the spread of the coronavirus.

He first listed the decisions made by the government to help protect the health of the populace, and to enable the country to manage within its limited resources.

“When we started this process, the objective was to delay the spread of coronavirus particularly at a community level so that if we have an outbreak, we can manage the outbreak within our capacity,” he said. “Two months ago, we did not have the capacity to deal with any kind of outbreak. We had limited space at Victoria Hospital and so the decision was made to move into the Owen King EU Hospital. That transition was successfully completed on Friday, and we are now focusing on preparing VH to be a respiratory hospital.”

He continued: “We converted three hotels to deal with people who needed to be quarantined. We realized early on that self-quarantine was not working. There were many reports that people who were supposed to be self-quarantined were out and about; so we made the decision that persons coming in to the country would have to go under supervised quarantine. Very quickly, we filled over 300 rooms. Therefore, we had to make the difficult decision of not allowing anyone else into the island, as we do not have the capacity to hold any more people in supervised quarantine. Yet, there are many who continue to breach supervised quarantine. And the resources required from the police and the healthcare sector to ensure that we have more stringent methods of supervision has added an additional burden to the system—one which we were not anticipating.”

As such, Mr. Chastanet said more severe measures were necessary in order to safeguard public health.

“We made a decision to put a curfew in place and to scale down non-essential operations (which is separate from emergency essential services that continue to operate at full staff). We went through this for the last week, but I don’t think anyone would be surprised when I say that we have not done a good job of making sure that we were all doing the right things. The government put the laws in place and made the resources available, but many refuse to adhere. There are still examples of people going to bars, or in crowds to beaches. Now, more stringent measures are needed.

“First, we will extend the curfew. As of Monday, March 30, a curfew will be in effect from 8 p.m. to 5 a.m. Second, the period of quarantine which was to end on April 5, will be extended to April 14. Third, we are going to suspend all liquor licenses in the country. So anyone operating a restaurant other than a drive through or takeout will be in breach of the law. The police will be boosting their staff and lowering their levels of tolerance.”

Mr. Chastanet cautioned Saint Lucians to heed the trends in Italy and the US.

“The coronavirus does not discriminate. There are as many young people dying from this as there are elderly people. The only way we will defeat the coronavirus for now is by practicing social distancing,” he said.