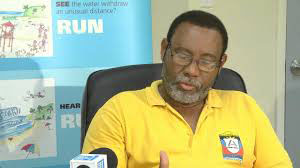 St John’s City has been recognised by the Caribbean Tsunami Information Centre (CTIC) and UNESCO as being “tsunami ready”.

A ceremony was held at the National Office of Disaster Services (NODS) yesterday to mark the designation of the nation’s capital as being equipped to cope with tsunamis – a series of enormous ocean waves usually caused by earthquakes or volcanic eruptions – and save lives.

The process has been brought to completion over the course of several months following the development of tsunami inundation maps, evacuation signs and a tsunami evacuation exercise among other things, according to Midcie Francis, NODS’ public relations officer.

“This basically means that these areas are better prepared to save lives from tsunamis through planning and education and awareness,” Francis explained.

Philmore Mullin, director of NODS, explained that Antigua and Barbuda has experienced approximately 22 tsunamis over the course of 500 years. Studies indicate that climate change-induced sea level rises worsen the impact of tsunamis.

Disaster teams have been hard at work ensuring that the nation is prepared for tsunamis through drills and projects since 2013.

“We now can boast that St John’s City – all of it – is tsunami ready… We have conducted the developing of evacuation routes, safe areas, and signs are in place,” Mullin detailed.

He went further to explain that there is an additional sign yet to be put in place.

He said, “We have one more sign to put up, and it’s a huge sign that will guide most of St John’s – Point and Villa – as to what that community looks like and where those safe areas are.”

Similar tsunami readiness projects have been completed in all schools and daycares as well as the Bethesda, Greenbay, Gray’s Farm, Point and Villa communities with Barbuda next on the list.

“The aim there is, over the next two to two and a half years, we would have completed all of the coastal communities in terms of the tsunami drills and making them tsunami, locally ready,” Mullin noted.

He later mentioned that this time around has been the most successful tsunami training to date, garnering over 5,000 participants from government offices as well as the private sector.

Blue Economy Minister Dean Jonas expressed satisfaction at the completion of this project, and his gratitude to all who played a role.

“I am very pleased with the efforts that we have made thus far… I wish to thank those two major entities for their input into the further development of our nation’s disaster management plan. The National Office of Disaster Services is to be commended for leading the charge,” Jonas added.