Iconic former West Indies fast bowler Sir Curtly Ambrose has added another accomplishment to a growing list following the launch of his first Youtube project, the Curtly and Karishma Show.

The Antiguan, who teamed up with Karishma Kotak — a British Indian model, actress and TV presenter to launch their first show earlier this week — said his daughter, Tanya, was the driving force behind the move.

“It started with Tanya and Richard Sydenham who had done my book and who is my manager. Both of them started talking about this Youtube thing and Tanya thinks I am too old fashioned, so she was the one going forward and she and Richard came up with the idea,” he said.

“Richard contacted some people because he knows a lot of people and I ended up talking to this girl [Karishma Kotak] and we had a good conversation and I just thought it was a good idea to do something different,” he added.

The show, according to Sir Curtly, will feature cricket from time to time, but will go beyond the norm, as viewers will also get a never-before-seen look into the life of the Antiguan off the field.

“Of course, we have to talk a bit of cricket but it’s a kind of show that will be fun where you would get to know a different me, get to know my co-host Karishma and we talk about many different things. We will talk about music and all kind of things and then we are going to try to get guests to come on the show as well and not just cricketers because it could be football or whatever so that is our aim. We have done two episodes already, the first one is out and the second one will be coming out soon,” he said.

With one episode already released on Youtube, Sir Curtly hinted that another instalment could be up by the end of the week.

In the first instalment, the Antiguan named his Retro 11 in the T20 format which included the likes of Gordon Greenidge and Sir Viv Richards, Jacques Kallis, Adam Gilchris, Shane Warne and Collis King. 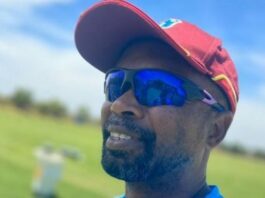