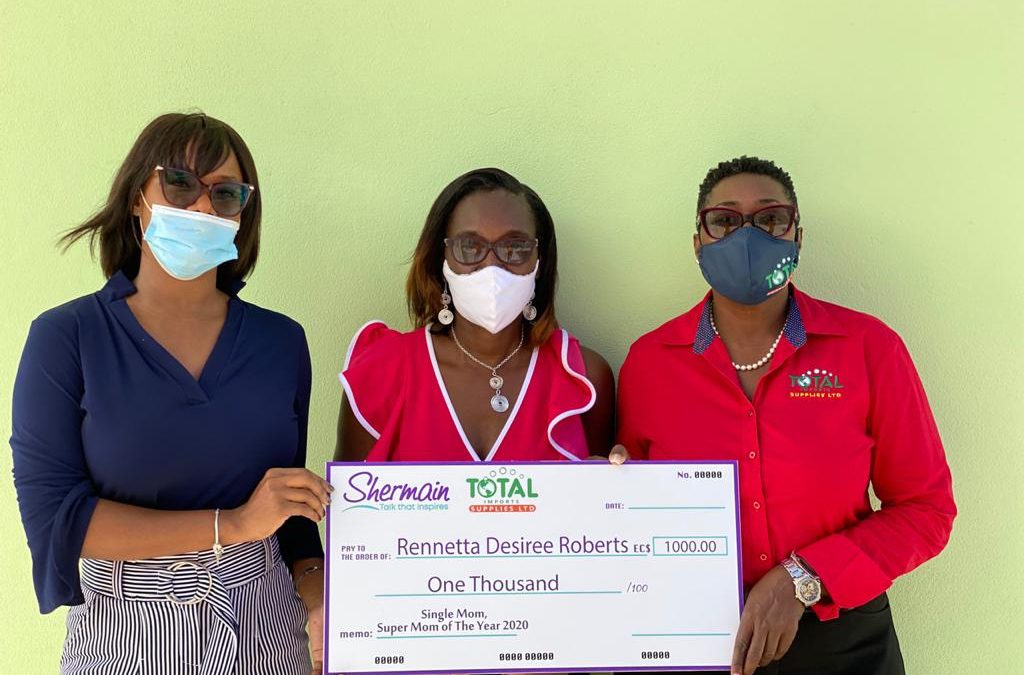 The Shermain Show and Total Imports Supplies partnered to bring some Christmas cheer to a deserving single mother. The new talk show wrapped up its first season with a Christmas finale where the winner of the show’s “Single Mom, Super Mom of The Year” Award was announced.

Rennetta Desiree Roberts was nominated by a friend and colleague, Tracy Withy-Browne, who first met the single mom two years ago. The elated mother of two and customer service representative had no idea why she was brought onto the show until the host, Shermain Jeremy, informed her that she was the first recipient of the award dedicated to highlighting the struggles and triumphs of single mothers in Antigua and Barbuda. Total Imports Supplies was the presenting partner and sponsor of the initiative and awarded the grateful mom a check of EC $1,000.

“I have a passion for mothers because I believe a mother’s role goes far beyond the home. She is responsible for raising children who will grow up to be positive and productive adults in our society, but statistics show that single mothers and the children they raise are very vulnerable. Our duty therefore as a community is to give single mothers the support they need. Rennetta’s story of overcoming loss, pain and grief while still committing to serving others was why she was chosen for the award,” Jeremy.

Meanwhile, Darell George, Chief Executive Officer of Total Imports Supplies said supporting such an initiative was personal for him, having been raised by a single mother himself. “I would not be where I am today if it were not for the sacrifices of my own mother, who raised me and my other four sisters and brother on her own. An initiative such as this, that supports other single mothers is perfectly aligned with the goals of the company as we seek to make a difference in our community.”

“The Single Mom, Super Mom Award” was launched a week ago on Facebook and Received 13 entries. The final episode of the show featured over 12 local businesses and entrepreneurs who were selected to be on “Shermain’s Favorite Local Things” Christmas list as a way to push local products and services during the festive season.

All the local businesses as well as others from the community played their part in the initiative by donating gifts not only for the winning single mom but for all the mothers who were nominated. Shuuz Plus, Exotic Antigua, Solange & Sunny Salon and Spa, Chase Supermarket, My HER Box, Divine Creations, Toast, Oh! Edibles, K.I.E. Antigua Enterprises, Her Mrs Creations & Experiences, Exclimation Designs, Amya’s Design, Oshens’s Essentials, BWC Enterprise, Emboss Swimwear and Willie Jean’s Gourmet Herbs & Spices all came onboard to add cheer to single mothers this Christmas.

The Shermain Show airs Wednesdays at 8 pm on ABS TV and Online and returns for a second season in 2021.

Persons can watch the season finale of The Shermain Show on www.shermainshow.com