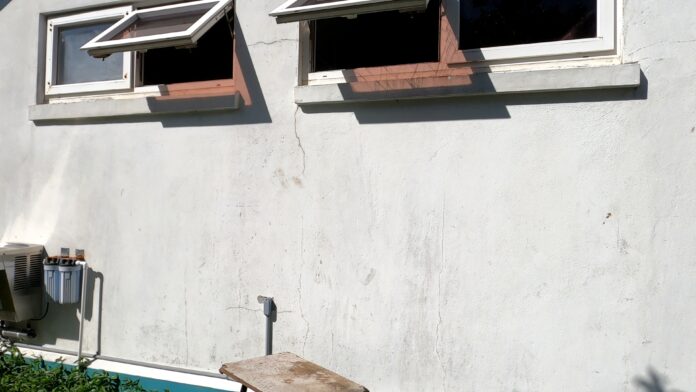 A group of cafeteria workers at the Antigua Grammar School (AGS) sat outside the facility on Wednesday morning in disbelief, having lost more of their goods to burglars.

One of those affected, who gave her name as Ms Edwards, said the thieves entered through a window on the left side of the cafeteria building. It is suspected that they climbed onto a table outside and pulled themselves towards the small opening near the roof to gain access.

Yesterday, there were no chilled drinks available for students because the thieves had taken the transformer for the refrigerator, plus freshly bought cartons of milk and carbonated beverages. They even stole a hat belonging to one of the students which had been left behind the day before.

The distraught woman said break-ins had happened multiple times before but the string of thefts had eased after they reinforced the main entrance door through which the thieves often gained entry.

“Sometimes, we pack our things and bring [them] home because they just keep breaking in,” she said, recalling that she had only just purchased the milk on Tuesday afternoon.

The business is privately owned and sanctioned by the school to operate.

One of the deputy principals at AGS, Cecelia Frederick, sympathised with the vendors, calling it a sad and terrible situation having to replace those goods out of pocket.

Frederick disclosed that while the school has security personnel during the day, there is no security at nights to monitor the grounds.

Situated across the street outside the AGS compound are other vendors who serve food and snacks to the students when they are on their breaks.

One of them is Hazel, who recalled what she saw when she came to work that morning. She said that on her arrival, she noticed that one of the building’s windows had been tampered with and one of her tables had been moved.

Acting on her suspicions, she went over to her neighbour’s stall where she noticed a hole in the panel.

The thieves had taken the gas tank, kettle and books which the fellow vendor stores to sell to students.

When Observer arrived on the scene, a man was already hard at work cutting plywood to patch up the damage. The owner had already left, but he said he had been given instructions to repair the broken partition.

Further along the street, another vendor lost a large quantity of drinks after the thieves broke in.

Theft in the area is an ongoing concern for the vendors, forcing those who can afford it to erect burglar bars on their windows.

Meanwhile, the women were unable to quantify their financial loss, but since they have no insurance, they are forced to replace the stolen goods on their own.

The AGS is just one among a list of educational institutions that continue to experience losses due to regular break-ins.

At the beginning of the September 2022 school term, the government promised to procure cameras for 37 public schools on the island. It also said it would provide resources to dispatch additional security officers at schools, but in the interim police and army personnel would make regular patrols during the night.

Before the AGS break-ins, reports from authorities suggested that the frequency of break-ins at certain institutions had abated since the patrols had been implemented.

Police were approached for comment; spokesman Inspector Frankie Thomas told Observer he was unaware of Tuesday night’s break-in at AGS.