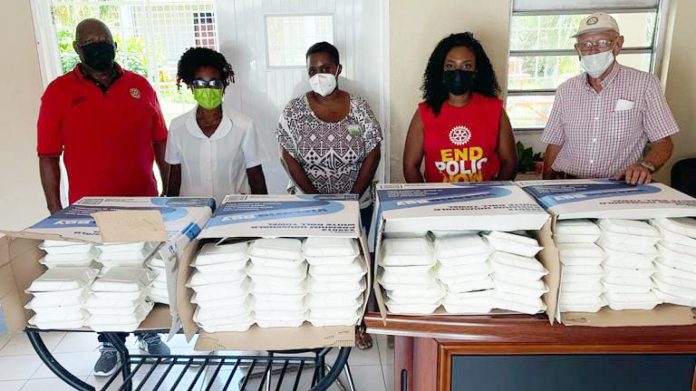 As part of efforts to raise further awareness about pertinent social issues affecting our society, the Rotary Club of Antigua (RCA) engaged in two significant activities this past weekend.

On Saturday, the philanthropic organisation donated lunch to the ClareVue Psychiatric Hospital where staff and residents were quite appreciative of the gesture. The meals were prepared by Nigel of Nigel’s Catering.

Speaking on behalf of the institution, Superintendent Candine Roberts and Nurse Jeannia Simon, both expressed thanks to the Club for the donation. They also commended the Club for the work that is being done to raise awareness about mental health in Antigua and Barbuda.

President of the Rotary Club of Antigua, Joanna Spencer, explained that the Club is very passionate about the issue of mental health and is aware that it is a cause for concern in today’s challenging times, particularly the challenges associated with the ongoing Covid-19 pandemic.

The country has also seen a rise in suicides, which opens an avenue for conversations on identifying issues relating to mental health and providing the necessary support system for persons who are affected.

In September, the Club launched a social media campaign, where a number of posters featuring encouraging messages were posted to further sensitise the public about the issue.

The Club also joined Clubs across the world under the umbrella of Rotary International, to commemorate World Polio Day under the theme “Delivering on a Promise.”

On Sunday, the Club, in partnership with the Rotaract Club and the Rotary Club of Antigua Sundown, hosted a Scavenger Hunt, which attracted the participation of a number of groups.

This activity was also created to further bring attention to mental health and suicide awareness.

We express thanks to all of our corporate partners for their unwavering support in this regard. The proceeds from this activity will be donated to persons who wish to seek support for mental health issues but cannot afford these services.

The Club is accessible via email- [email protected].