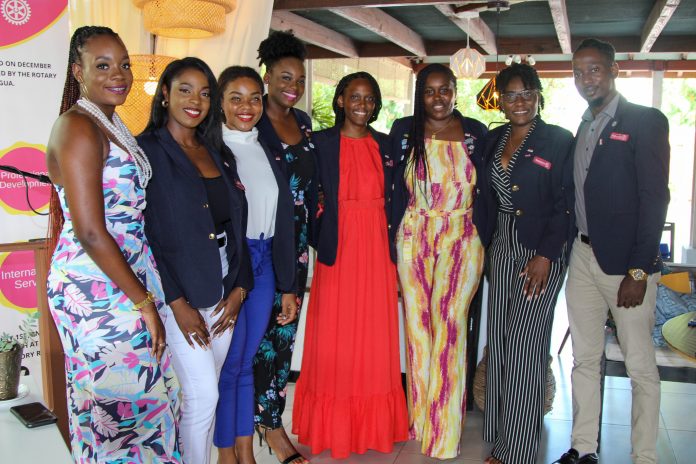 On Sunday 4th July, the Rotaract Club of Antigua officially installed its new executive board for the upcoming year 2021-2022.

Immediate Past President (IPP), Ti-anna Harris handed over the reins of the youth service organization to Ashlee Christian, as the club’s 35th President.

In her remarks, IPP Harris, who served two consecutive terms as President, thanked the members of the Rotaract Club for entrusting her with the opportunity to live up to the club’s motto, “Service Above Self”. She further expressed that some of the key projects during her tenure included the donation of water tanks to persons within the disabled community; Christmas donations to the residents at Clarevue Psychiatric Hospital; as well as the two most recent donations of supplies to the Greenbay Primary School, and an automated external defibrillator to the Cancer Center Eastern Caribbean.
In her closing comments, she thanked the Immediate Past President of the Rotary Club of Antigua, Kevin Silston for his support on their clubs’ joint projects, and left a special charge to the incoming President, Ashlee Christian, “always put the members of the club first.

President Christian, who is currently an inspector at the Antigua and Barbuda Social Security Board, credits the Rotaract Club of Antigua for her personal and professional growth having been a member since 2017. Over the years, she has served in numerous capacities, including Treasurer, Finance and Fundraising Director, Vice President, and her most recent position,
Community Service Director.

In her first speech as President, she urged the members to reflect on the reasons why they joined the club, while they continue to work towards a common goal, to serve. During her upcoming year as President, she expressed that it is her full intent to lead the organization with integrity, accountability, strategy, and most importantly teamwork. In addition to this,
she acknowledged that the club’s main resource is its members, and as such, over the next twelve months, it is crucial to improve the quality of the membership experience, focusing immensely on recruitment, retention, and continuity.
In her final remarks, she expressed sincere gratitude to IPP Ti-anna Harris, for her continued motivation, and the opportunity to serve on her previous board of directors.

For the upcoming year, under the theme, “Serve. Lead. Empower. Change”, President Christian notes that the club will continue to focus on the membership experience, in addition to increasing fundraising programs and service projects. She further states that some of the initiatives that the club will be embarking on in the near future include a Childhood Obesity Project, in collaboration with the Rotary Club of Antigua; Mental health initiatives and food drives; and the Mommy and Me Programme.