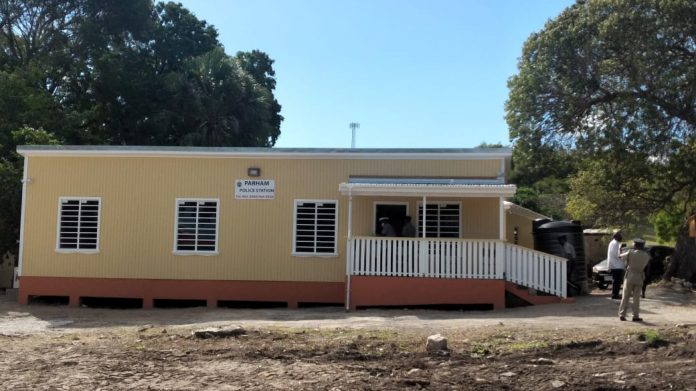 The refurbished edifice was handed over yesterday morning.

Present at the brief ceremony was Police Commissioner Atlee Rodney who not only shared his pleasure with the smart new station but thanked all those who played a part in its completion.

Rodney also thanked the people of Parham and neighbouring villages for their “patience and tolerance” during the transition.

“As we provide service to the Parham community, we also want to pause and acknowledge their patience.

“So, I want to thank the division and the district of Parham for their patience and their tolerance,” Rodney said.

He elaborated that the Parham Station represents a purpose-built and fitted structure that holds all the components that officers need to carry out their duties efficiently and offer the public a greater level of professionalism.

He asked officers to be appreciative of the efforts made to bring comfort to their working environment.

It has been a long and frustrating wait for lawmen within the parish of St Peter’s to find a new home; they were temporarily relocated in December 2019 after the dilapidated original building was deemed unsuitable for work.

They were then moved again a few weeks ago to Coolidge to make way for the country’s hosting of the ICC Under-19 World Cup.

The state of the country’s police stations and holding cells has been a controversial matter for years. In June 2020, it was one of the main factors behind protests attended by dozens of law enforcement officers.

The Parham station is the second of two in Antigua to be upgraded in recent years. Work has also been done at the St John’s Police Station and the Police Headquarters.