The owner of the Delightful Chinese Restaurant says the ‘exaggerated’ reports concerning the sanitary conditions of his business have drastically affected sales.
Stanley Young has however indicated his willingness to continue to work along with authorities at the Central Board of Health (CBH), to ensure certain requirements are met.
He also commented on the photographs that were circulating, allegedly showing meat that was cooked in advance and reheated to complete orders. He indicated that the photographs are not a true reflection of what actually takes place at the popular eatery.
The Old Parham Road restaurant re-opened last Thursday evening after closing temporarily to accommodate health inspectors who were investigating alleged violations.
“Since we opened on Thursday afternoon until Saturday business is quiet, mostly our regular customers have continued to visit and support the business. When I compare it to weeks ago, business was booming,” Young said during an interview on Sunday with our newsroom.
Authorities at CBH dispatched inspectors to the restaurant last week after  a worker who was recently fired from the establishment began distributing photographs of food being prepared in the kitchen, and the worker spread allegations of unsanitary conditions.
Following the assessment last week, Acting Chief Health Inspector, Sharon Martin, explained the health violations ranged from poor refrigeration of food, cracked walls and poor sewage and waste water disposal, and workers not being properly attired. She said other things were observed, however those noted were most critical.
The health official said the department recommended, “That food should be thawed under refrigeration temperature, and that staff should wear clean clothing every day, already cooked food should be kept hot until ready to be served and a refrigerator should not store more than its capacity.”
The restaurant owner was also encouraged to improve the waste disposal system on the compound and install extractor fans to reduce the heat during the preparation of meals.
Meantime, Young explained that the recommendations made by the health inspectors were mainly on how to improve operations based on food safety requirements and were not centred around unsanitary conditions as was highlighted by the female worker who was fired after having served only three months on the job.
He also added that the pictures of poultry that were on a table and counters were actually partially seasoned meat that was being prepared for orders that very same day.
“The meat was partially cooked and would have been completely cooked in time to make each delivery. Sixty percent of the orders that come in is for chicken, so we have to order poultry every day which has to be pre-cooked and seasoned to keep up with the demand of the orders,” Young said. 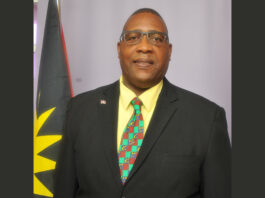