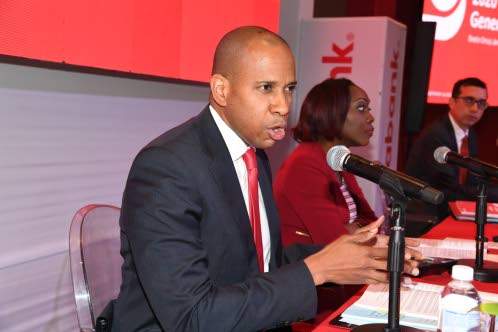 A huge 56.7 per cent cut in net income characterised the financial performance of Scotiabank Group. Yet the group was still able to maintain its profitability for the nine-month period ended July 31, 2020.

However, during the period under review the banking group was able to eke out net income of $5.56 billion compared to $9.79 billion for the corresponding period last year.

When expected credit losses per International Financial Reporting Standards (IFRS 9) is accounted, net income was down $893 million or 7.6 per cent due to lower transaction volumes arising from COVID 19.

In its just released third quarter results, Scotia Group notes that the whopping drop in net income was primarily attributable to a big jump in expected credit losses of $3.3 billion to $5.25 billion given the revised assumptions incorporated in the banking group’s impairment methodology as a result of the global pandemic.

Total revenues excluding expected credit losses for the nine- month period was $32.1 billion, down $1.7 billion or 5.1 per cent when compared to 2019.

Speaking at the bank’s third quarter news briefing yesterday, President and Chief Executive Officer David Noel emphasised that expected credit losses in the current fourth quarter will be much lower as the economy picks up.

As such, the provision for credit losses will be much lower than the $5.25 billion provisioned for Q3.

Noel was quick to point out that expected credit losses are not actual losses but anticipated losses in the event that loans go bad because of the prevailing economic conditions.

“The good thing about provisions (expected credit loss provision) is that if things pick up as we hope and if you see the trend that there is no need for a lockdown and there is an early vaccine, we can always write back those provisions,” the Scotiabank boss told business journalist via the Skype-conducted quarterly briefing.

Noel highlighted that despite the challenges, the banking group continues to deliver commendable results while pointing to the overall loan portfolio, which grew by 12 per cent. This growth was largely due to the strong performance of the commercial banking unit which grew by 24 per cent versus prior year.

DECLINE IN NET FEES AND COMMISSION

Net fee and commission income amounted to $5.1 billion, representing a reduction of $904 million or 15.1 per cent. The year over year decline noted in fee and commission revenues was primarily attributable to lower transaction volumes stemming from the COVID-19 pandemic.

In addition, the continued execution of Scotia Group’s digital adoption strategy of educating customers about its various electronic channels attracting lower fees, also contributed to lower nets fees and commission. Insurance revenues declined by $144 million or 5.6 per cent to $2.4 billion, owing to the reduction in premium income, while net gains on foreign currency activities and financial assets amounted to $5.8 billion.

This was a reduction of $537 million or 8.4 per cent below prior year. This decline was due to lower trading volumes and sale of securities.

Deposits by the public increased to $335.1 billion, up from $303.6 billion in the previous year. This $31.5 billion or 10.3 per cent growth in core deposits was reflected in higher inflows from our retail and commercial customers, signaling continued confidence in the strength of the group.