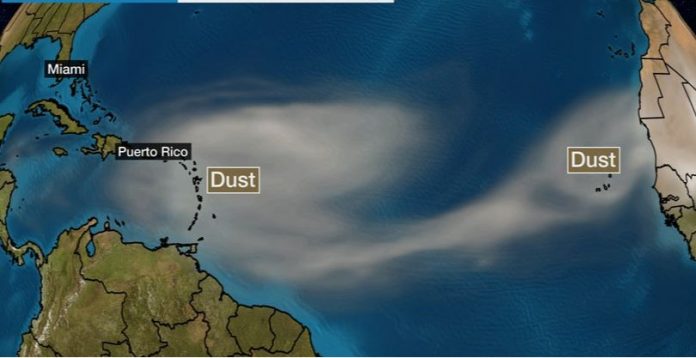 (CNN Weather) – After a quick and active start to hurricane season, it looks like any significant tropical development is unlikely over the next week.

Its thanks to a significant area of Saharan Dust seen in satellite imagery blowing off the west coast of Africa.

Forecasting models show the dust moving across the tropics — the main areas of tropical development — and into the Gulf of Mexico by this time next week.

That means it will travel over 5,000 miles, says CNN meteorologist Haley Brink.

“Large plumes of Saharan Dust routinely track into the Atlantic Ocean from late spring into early fall,” she says.

“Every so often, when the dust plume is large enough and trade winds set up just right, the dust can travel thousands of miles across the Atlantic and into the US.”

Though the dust is a visible indication there will be little to no tropical development, it isn’t the main reason why a tropical system will not form when it is present.

“It is the dry air and additional vertical wind shear along with the dust that are the driving factors in limiting tropical storm development.”

Vertical wind shear is the change of wind speed and direction with height. For a hurricane to form, it needs little to no wind shear and a very moist atmosphere.

So, for the next week, don’t expect the Atlantic to see it’s fourth named storm. Instead, by this time next week, people living and visiting the Caribbean and Gulf Coast beaches will be in for some spectacular sunrises and sunsets.

When dust like this travels across the ocean, “the dust particles high up in the atmosphere can scatter sunlight and create some of the most vivid sunsets,” Brink says.