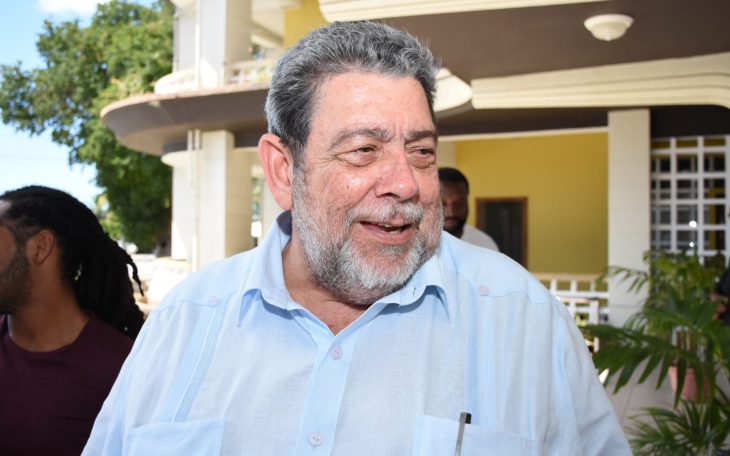 (CMC) – St. Vincent, – Prime Minister Dr. Ralph Gonsalves says Cabinet will this week approve a statutory rule and order declaring a time slot for persons in quarantine to vote as he predicted that his ruling Unity Labour Party (ULP) would sweep all 13 seats on the mainland in the November 5 general election.

Gonsalves, who is seeking an unprecedented fifth consecutive term in office, told supporters over the last weekend that the main opposition New Democratic Party (NDP), which lost the last two general elections by an 8-7 margin, is falling apart as Vincentians get ready to cast their ballots.Gonsalves told supporters at a public meeting in Biabou, a village on the eastern part of the island, that once ULP supporters go to the polls, the NDP “will get a massive licking in this election as though they have never had.

“They are on track to lose support in every single constituency. And I am expecting us to win all 13 constituencies on St. Vincent,” Gonsalves, 74, said.

“I want to say to you that also in the Grenadines they are losing support. I know the majorities, percentage-wise, are high against us in the Grenadines, but we are making progress, but I can tell you on the mainland, be prepared to win 13 seats. I’m greedy this election. Ah want all 13.”

Gonsalves said he was told that there were more people at the ULP’s event in Biabou than at the NDP’s national rally and manifesto launch, which was taking place at the same time in Petit Bordel.

“I want you to make sure you know where your polling station is. Look it up, check it out and if you don’t look it up yourself, ask a friend to look it up for you. And on Thursday, the 5th, you go to the polls early at 7 ‘o’clock in the morning. Polls would close regularly at 5.00 pm (local time),” Gonsalves said.

Gonsalves also told supporters that the government is moving to ensure that all persons in quarantine for the coronavirus (COVID-19) would be able to cast their ballots.

““We are seeking to ensure that toward the end of the day, either the last half hour of the regular polling or we put on an additional half an hour by statutory rule and order that will be finalised this week, for those persons who are in quarantine or in isolation will attend the poll for that last half an hour, whatever may be taking place on polling day,” Gonsalves said.

“It means, therefore, that you don’t have to worry that during the course of the day that anybody from quarantine or isolation going to be in the line with you. So you can go and vote without any inhibition, without any concern whatsoever,” the prime minister said.

He said that the ULP is making sure that, as a political party, it has masks for voters in the line “to make sure that you and everybody in the polling station would be protected in all the circumstances.

“I want to explain this to you so that you do not have any worry about going to the polls,” Gonsalves said.

In a revised statement over the weekend, the Health Services Subcommittee of the National Emergency Management Organisation (NEMO) said the Supervisor of Elections and the Attorney General are in discussions in relation to the specific time period to be assigned for voting on November 5, by eligible electors/voters in quarantine or isolation.

St. Vincent and the Grenadines has recorded 74 cases of the coronavirus virus since it was first detected in China last December. There has been no deaths.