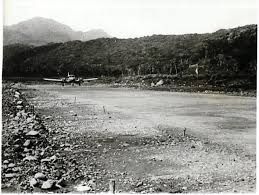 (DNO) – Sixty-two years ago, in July 1958, the first airplane to land at Melville Hall touched down on a temporary 2,500 ft airstrip laid out in the flat river valley. The aircraft was one of two planes belonging to the newly formed Montserrat company, Leeward Islands Air Transport, LIAT.

The airline was founded by aviation pioneer, Montserratian, Sir Frank Delisle, in October 1956. He was LIAT’s sole employee, operating one three-seater Piper Apache aircraft flying between Antigua and Montserrat.

In 1957 the airline extended its route network to include St Eustatius, St Maarten and St Kitts. It also added a six-seater Beechcraft Twin Bonanza to its fleet.

It was in this twin-engine Bonanzathat Frank Delisle landed at Dominica for the first time in July 1958 and added Dominica to the LIAT route. He began operating a service between Antigua, Dominica and Barbados twice weekly, on Tuesdays and Fridays.

Thus was born the LIAT service that kept Dominica connected to the outside world for the following 62 years. Now it is no more.

The original short, unsurfaced airstrip at Melville Hall, was used for three more years while the permanent runway and terminal building were being constructed alongside it. A galvanized shed with old motor car seats and coffee served from a coal pot by the famous Mrs Edwards was the temporary terminal.

The new terminal and runway were officially opened by Chief Minister, Edward Oliver Le Blanc, in November 1961. Dominica was the last main Caribbean island to get an airport. This runway (twice resurfaced and once extended) is still in use. The original terminal was replaced in 1978 and was readapted in the early 2000s.