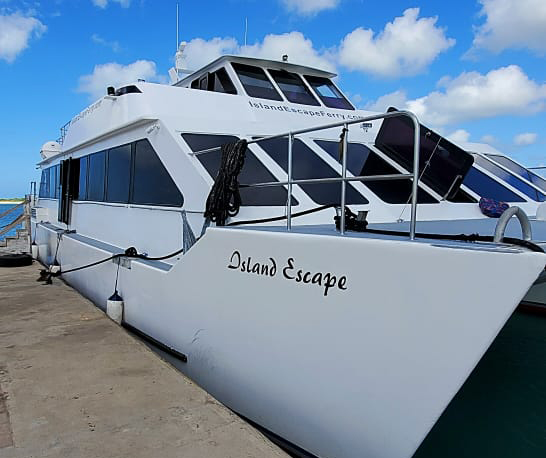 The luxurious Island Escape ferry which previously travelled between Antigua and sister island Barbuda is back in operation.

The 150-passenger fast vessel ceased service in August after almost two years providing transport between the two islands. It previously held the contract taking construction workers from the mainland to Barbuda’s Peace, Love and Happiness (PLH) project, but when that ended, Island Escape left the country citing unprofitability.

It has now returned, following upgrades while on charter in the British Virgin Islands.

Many of the upgrades were necessary to enable the vessel to obtain international sailing certification so it can reestablish the water bridge between Antigua and Montserrat next spring.

The ferry is under new local ownership in a joint venture between Tropical Adventures and Rendezvous Antigua. It will continue to operate under Island Experience Tours, its original owner Captain Mark Rosandich told Observer.

“I’m very excited about the prospects and energy the new ownership brings to the table who have new and exciting tourist-based venues in mind for the boat being a hybrid; that is, a passenger ferry/excursion vessel,” Captain Rosandich said.

Currently, from Mondays through Fridays, the ferry departs the pier on lower High Street for Barbuda at 7am, and returns to St John’s at 4pm. However, from December it will operate a 9.30am departure on Saturdays, geared at capturing the tourist market.

The vessel is also available for private parties going into the holiday season.