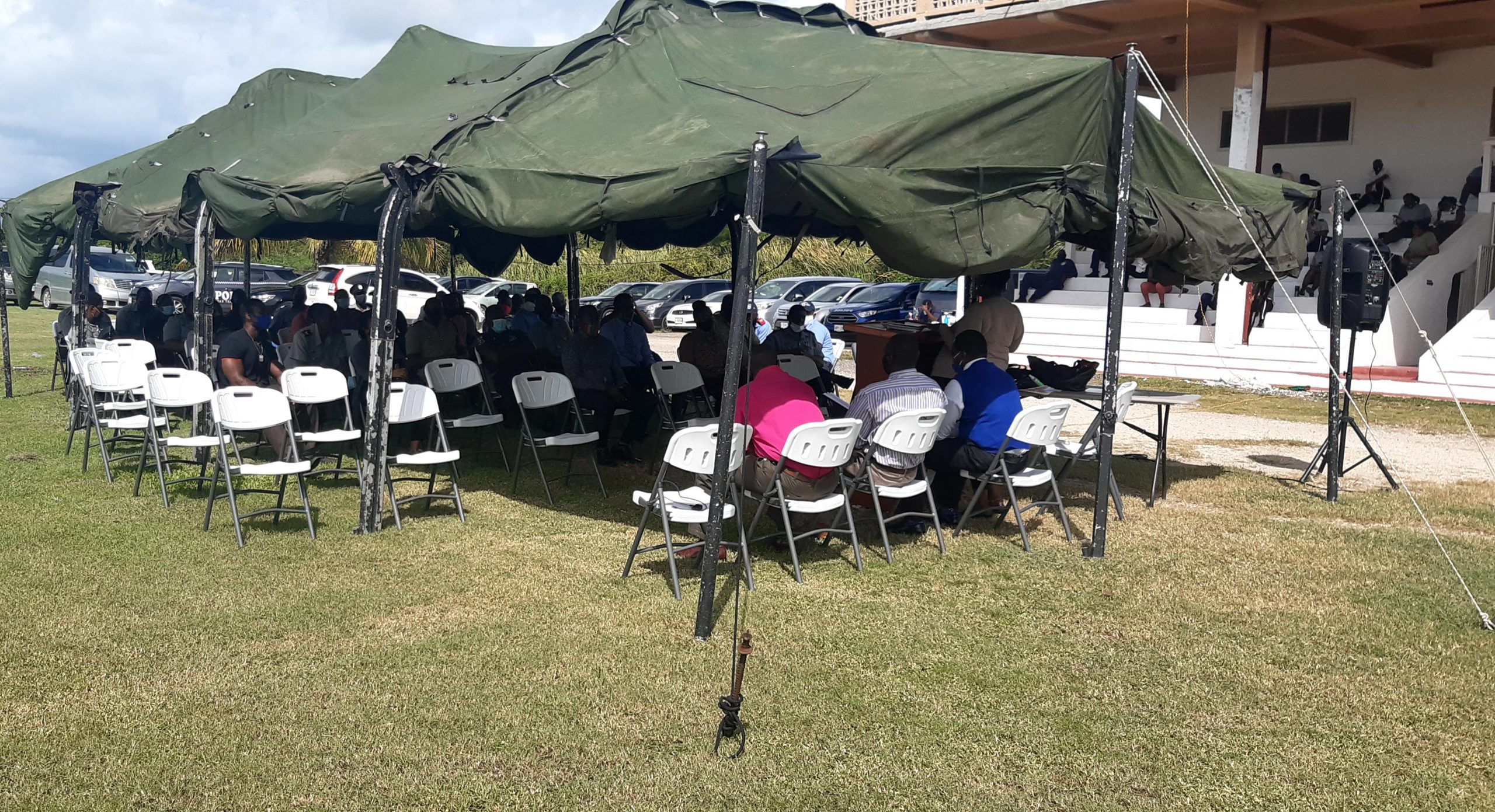 Story and photos by Elesha George

Recent attacks against police officers – as well as proposed legislation to increase their mandatory age of retirement – drew pockets of law enforcement officials to the Police Recreation Ground on Wednesday for the third time this year.

Chairman of the Police Welfare Association (PWA), Rosevelt Browne, told Observer that the executive came to update its members about the government’s responses to their grievances.

Like previous occasions, Browne explained, “We’re trying to get better working conditions and other benefits and resources.”

A number of police stations across Antigua are in need of renovation and police officers have no health or risk insurance. The principal medical benefit afforded to them does not provide immediate cash-back for the monies spent on treatment, check-ups etc.

At the end of September, the home of a police officer was set ablaze and on Monday a fire broke out inside the Criminal Investigations Department (CID) where a handful of officers were on duty.

In addressing the lack of on-the-job security for police officers, Browne said, “I am really concerned about the safety of our officers”.

His colleague and assistant PWA treasurer, Sylvester George, called for all police and fire stations to get proper lighting and fencing. He also wants shrubs cleared around each premises and the installation of CCTV cameras.

“When an officer leaves home to come to work, he must feel good because at the end of the day this officer comes out to protect the nation of Antigua and Barbuda, leaving his loved ones at home and we want him or her to feel safe so that they can go back home to their loved ones,” George added.

In addition to safety concerns, members of the executive share a common concern regarding a legislative change that would have increased the age of retirement for all law enforcement officers from 60 to 65 years old.

Currently only gazetted police officers (from the ranks of ASP and above) whose job titles fall under the Civil Service Regulations are mandated to work until 65. That change happened when the Social Security Board announced that it was increasing the pensionable age to 65 by the year 2025.

Other law enforcement officers with the rank of inspector and below were not affected by that amendment as the terms of their retirement are guided by the Police Act which limits it to 60.

The PWA chairman noted that, “At least 80 per cent of the force is operational so it’s just about a small percentage that is administrative … even before retirement age your health would already be rapidly decreasing.”

The police hierarchy however were said to be in favour of the change and had been opposing the PWA which was pushing for it to remain the same.

A recent meeting was called with the welfare group where they were met with counter arguments regarding why an increase in the retirement age was necessary, particularly to facilitate the social security scheme.

“They said that if the officers’ retirement age is at 60, as it is now for inspector downwards, they would not be eligible to apply for their pension until 62. Right there, is where the officers have a problem. They say they want to leave with their pension,” Browne explained.

George said he is in agreement with the chairman and told Observer, “We don’t want police officers to be working beyond 60”.

“What sort of service can they provide beyond the 60 mark,” he questioned, noting how strenuous a police officer’s job is.

“They’re not going to be able to provide much efficient service for the public,” he concluded.

George also believes that increasing the age of retirement will stagnate members’ development and will not leave much room for promotion of officers within the hierarchy of the force.

The draft Bill which dictates that the mandatory retirement age remains at 60 years old for all officers was expunged from the parliament order paper nearly two weeks ago, to allow the necessary government agencies to meet one more time before it is tabled.