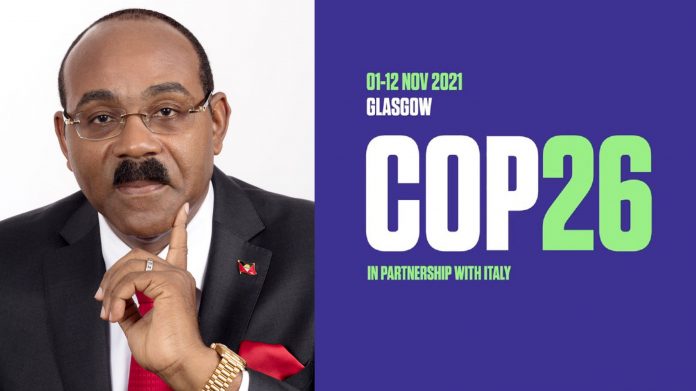 As the 2021 United Nations Climate Change Conference, or COP26 winds down, Prime Minister Gaston Browne has shared his disappointment with several aspects of the conference.

PM Browne who is also the Chair of the Alliance of Small Island States (AOSIS) had in a previous interview detailed his agenda that his team had planned to lobby for, the main item being the fact that some of the richest, most developed countries in the world are the biggest contributors to global climate change but have yet to make significant changes despite previous commitments.

A group of these countries had already pledged to provide funding, in the form of US $100 billion to assist in the adaptation and mitigation of climate change effects. However, no major moves have been made thus far.

Browne in fact agreed with recent comments by Dr Collin Young from Belize who mentioned that the larger countries are basically kicking the can when it comes to their commitments.

A pledge to reducing fossil fuel, increased subsidies for green energy and an increased scale of funding for small island countries were among some of the objectives PM Browne said were not looked at.

“We also wanted to see increased scale of funding so that more monies will be available to some island states and other developing countries to adapt and mitigate against the effects of climate change and even to have some formal mechanism for compensation to loss and damages. Those are among the objectives we had established going into COP26 but unfortunately if you look beyond the incremental gains, COP26 was really a PR exercise, a great PR platform,” he said.

He did however admit there were some benefits from the conference.

“I will accept that there were some gains. South Africa, for example, they will benefit from $8.5 billion in funding from the G7 countries as they literally seek to close their coal industry. A number of countries would have committed to subsidising renewables to make them affordable. They came up with an additional $10 billion that they will make available to assist with funding. The G7 countries had promised $100 billion many years ago and that has not materialized, but with this increased pledge from Japan obviously it would put us a little closer but still not enough,” Browne added.

He once again made the point that the larger countries need to take environmental awareness more seriously, as the fate of the planet is at greater risk now more than ever.

He is stern in his beliefs that it is up to the small island countries who have to deal with the consequences of the actions of the larger territories to keep this fight going.

“If we don’t increase our climate omissions to keep global temperatures down below 1.5 then obviously, there will be catastrophic consequences and the irony about that is, it is the small island states in the Caribbean and in the Pacific and Indian Ocean are the ones that are in the frontlines and will suffer disproportionately. We have to continue to fight strenuously to advocate in a more vociferous way to get these large emitters to reduce their omissions because they are not only imperiling our own civilization but they are literally the imperiling the planet and the entire global human civilization. It is a significant existential threat that requires a lot of activism and a lot of agitation to force these large emitters to conform,” Browne said.

COP26, which is being held at the SEC Centre in Glasgow, Scotland, will end on November 12.