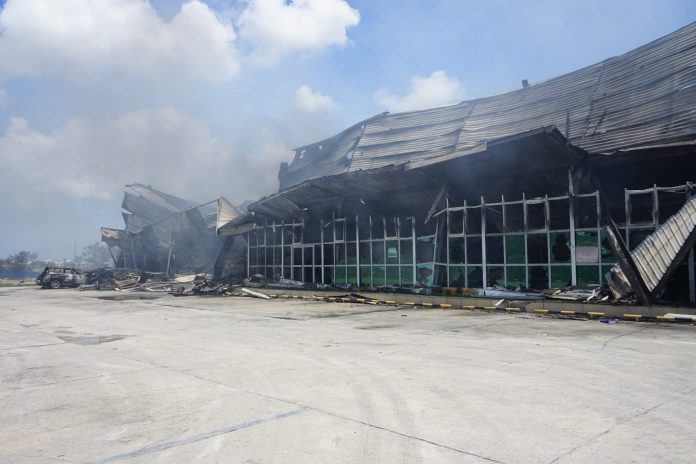 Plans are in the pipeline to rebuild the XPZ supermarket which was destroyed by fire this week, the company revealed yesterday.

A massive blaze broke out in the early hours of Tuesday morning, destroying the large Paynters-based store which opened in 2018.

The building was still smouldering on Wednesday afternoon as the once packed parking lot remained empty and the small businesses that operated in front of the edifice were noticeably absent.

The inferno was a shock to many who took to social media to share their disappointment that one of their favourite supermarkets had been razed to the ground.

But the manager of the store on Sir Sydney Walling Highway, who identified himself only as David, says the owner of the business is making plans to return to Antigua and Barbuda in the hopes of rebuilding the company.

David said that is because the company is concerned about the almost 60 employees now out of a job.

He explained that they do not want to see the employees unable to support their families.

David also told Observer that the passports of four of the Chinese employees were also destroyed in the fire.

The manager said the two-storey building housed the supermarket on the lower level while the upper level housed the storeroom, noting that there is unlikely anything that is salvageable.

The damage so far is estimated at EC$10 million.

Management is expected to have a meeting with the employees of the major supermarket in the days to come to discuss the way forward.

Meanwhile, David says the Chinese employee who has not been seen since the fire – which sparked alarm yesterday – remains missing.

He said he filed a report on Wednesday afternoon. A police spokesman confirmed officers were looking into the matter.

Meanwhile, it is not yet known whether charges will be brought against a fire officer who apparently stole thousands of dollars from XPZ while it was burning.

Observer understands that the senior member of the police force was questioned by the CID for allegedly stealing US$3,000 from the supermarket on Tuesday morning.

The man, who recently celebrated 40 years as a police officer, reportedly stole the money from a safe, while other officers were attempting to extinguish the flames.

Sources tell Observer that police later found the money at the man’s home.

According to reports, an investigation will be carried out by law enforcement into the matter.