(An address to the CARIFESTA V SYMPOSIUM, Port-of-Spain, Trinidad and Tobago / August 1992)

Before adding my contributions to this discussion on ‘Pan as Icon – preserving, claiming, marketing,’ let me be quick to acknowledge my limitations on this subject and give a view as to ‘where I am coming from.’

I am not a panman/pannist/panplayer. I am not a musician. I am a lover of music and not the lover of any particular musical instrument. If I favour any particular instrument, it would be the tenor saxophone in appropriate setting and able hands. I am as comfortable with (Clive) Zanda’s piano as with Miles’ trumpet, as with Luther Francois’ saxophone, as I am with Boogsie Sharpe’s pan. Therefore, for this presentation I separate the product of the steelband/pan i.e. music played on pan from ‘pan’, the sociological phenomena which emerged as a consequence of ancestry, heritage, colonialism and the varying forces that helped shape and create our Caribbean identity.  My assessment of pan music is like my assessment of any other music. Music, regardless of source is either good or not good. It is the later concept, pan – the sociological phenomena that I seek to address.

Secondly, I am from Antigua and run serious risks for attempting to ‘talk pan’ in Trinidad, for the simple and no other reason than my place of birth and current abode. But I hope I can bridge that gap and another that exists in our analyses and appreciation of the music of the region. The latter gap exists because many of our leading and better known regional critics and analysts have yet to pay serious attention to the manifestations of pan and calypso in the smaller territories, confining their analyses to Trinidad and Tobago, notwithstanding the fact that Arrow and Short Shirt and Beckett and Gabby and Swallow and Obstinate and Grynner and Winston Soso and arrangers, Eddie Grant and Frankie McIntosh and others, have marched across calypso stages here, leaving giant foot prints, contributing seriously to the present shape of calypso and soca. I hope that in the short time that I have here, to be able to illustrate some similar – if not vivid and dramatic – living connections between Caribbean people within the development of steelband.

What I will do briefly – is – in few sentences, outline a history of the steelband movement in Antigua; identify, if possible, connections with the birthplace of pan – Trinidad and Tobago and then see what learnings we can draw from this history. I will finally re-focus on the topic, ‘Pan as Icon’ and here I interpret ‘Icon’ as ‘image of heritage.’

There are a number of accounts of the origin of steelband in Antigua. Names and dates may often differ from account to account. The account I give here draws on the work and reminiscences of a number of Antiguan panmen and/or researchers. This group includes Eustace Manning, Leroy ‘Jughead’ Gordon, Harold Lovell, Baldwin Spencer, Anthony ‘Mamba’ Liverpool and others. Much that is written can be found in various Carnival magazines or as newspaper features. There is space for a comprehensive history of the steelband movement in the country. Many of the pioneers are still alive, some still active. However, it is generally accepted that the sound of pan reached to Antigua before the pan did. 1946, a group of young men were returning to Antigua from Curacao on the schooner, ‘Lady Boat’ which stopped in Trinidad for passengers, cargo and water. The young men, on arriving in Antigua reported to others what they had seen and heard in Trinidad where the pan movement had already started unfolding. Youths in a depressed urban ‘ghetto’ called ‘the Point’ started experimenting and produced their variety of ‘the pan.’

An actual Trinidadian pan reached Antigua months later through policemen returning from training programmes in Trinidad. It was more advanced than the Antigua creation. Its clarity especially, was remarkable. Communication between the Trinidad and Antigua movement was established informally, each absorbing creations from each other with ease – more notes, different pane, straps around the neck, two sticks, two sticks with rubber (Antiguan) etc. The social conflicts between the upper classes of society and the urban proletariat in each country are mirror images of each other. Government in Antigua passed laws allowing police to confiscate pans from people. A Steelband Association was formed and argued that if Government was going to ban the steelpan which the Association considered an instrument, then it would have to ban organs, pianos, guitars and trumpets too.

The Antigua movement found champions in the middle and upper class. The names of Bertha Higgins and Commander Griffith are associated with this musical support for the movement. Support also came from British Governor Baldwin – a white official who seemed to have won the admiration of Antigua folk, and who seemed to have constantly irritated the aristocratic elements of society. Baldwin passed a bill that allowed steelbands to play on the road anytime. Writers in Antigua purport that this act of Baldwin helped to ease similar pressures off the pan movement in Trinidad and Tobago at the time.

The Antigua Steelband Association predated the government Steelband Committee formed here in Trinidad in 1949. The Antigua national steelband competition of 1949 with test piece ‘Peanut Vendor’ predated the Trinidad national competition. The Antigua steelband ‘Brute Force’ is the first steelband to be recorded commercially and produced on wax/records. Of interest is the fact that the singer on their record was Miss Dot Evans, a Trinidadian. Antigua also claims the first all-female steelband when in 1952 ‘uptown girls’ – as they were referred to in those days, formed a band called ‘Pastel Intruders’. They won acclaim with a rendition of ‘Bells of St. Mary’s’, the same tune ‘Casablanca’ played to win the first national competition here in Trinidad.

Let me be careful and state clearly what I am doing, and what I am not trying to do. I am not engaged in a me-first syndrome or battle here. I hope I am a little too smart to do that. I remember the furors caused here in 1986 when a colleague of mine had his remarks, made in a Symposium on Calypso, interpreted to mean that – ‘calypso started in Barbados’. WOW! There are easier ways to commit suicide – even the Express editorial reacted sharply. What I am doing here is identifying parallel developments in two Caribbean countries – dissimilar in size and ethnic compositions, but both with common African heritage. I wish to suggest that there are important lessons for us Caribbean people to learn from experience, lessons about our similarities, our uniqueness, our common and therefore our imperative integrated future – ‘even though governments do on yet know this.’ My thesis is that through our study of pan, the sociological movement in these two countries, Trinidad and Antigua, we can identify and highlight the natural affinity between us as a Caribbean people shaped by the same forces of forced dislocation, slavery, colonialism and present day capitalism. It is this affinity and similarity of peoples and nothing else that will form the basis for future Caribbean integration. No CET, no Common Currency nor whatever else is going to provide it.

Let me get to the point, by quoting J.D Elder from his study ‘From Congo to Steelband’ where in paraphrasing W. Austin Simmons, he has this to say about steelband: “…….. steelband as the latest link in a cultural chain stretching backwards for centuries into the dim past to primitive music, rich with the voices of African drums in the night, snatched up along with unsuspecting natives from the Gold Coast, the Ivory Coast, the Slave Coast, from Angola and Congo littoral swamps. But the musical instruments retained their basic percussional character, though changing in form – skin drum, stamping tube, tambour bamboo, biscuit drum, dust bin, (iron band) and finally the steel drum. From Congo drum to steel drum – in unbroken continuity through centuries of human struggle for freedom …. to sing, dance and play masque.” The steelband therefore can be seen as a manifestation of a cultural continuum, or as Elder continues: “it is really the latest progeny out of a line of ancestral percussional instruments going backwards into ages and losing itself among the squeeze drum and the xylophones. The cultural chain is not broken.”

And now perhaps a little closer to the topic – ‘Pan as Icon, image of heritage’ – I think we covered that aspect – then comes these three words. ‘Claiming,’ I have no problem with. We are too sophisticated a people today to have this creation stolen from us as so many other African creations. Efforts like these seminars and the writings/recordings of our historians, cultural activists, intellectuals, musicians themselves and journalists will strengthen what is happening in the movement, more so than anywhere else in the world.

‘Preserving,’ I am not too sure what we are preserving – as a matter of fact, the use of the term suggests that the development of pan, the musical instrument – is over; that pan has reached its physical limits and therefore has reached the zenith of its instrumentality. While I am one who calls for the standardisation of the pan as instrument, I am also wary of the possibilities that standardisation may lead to an end of experimentation with steel and fire and hammer, and that rigid standardisation may be, in a way, a limiting factor placed on our creativity. Maybe it is not time for the museum yet! Yes, the Antiguan ‘black pan’ and the double-bar tone pan and the ‘growler,’ pans that are no longer in use, can be preserved. ‘Cherished’ might be a more appropriate term. (To be continued) 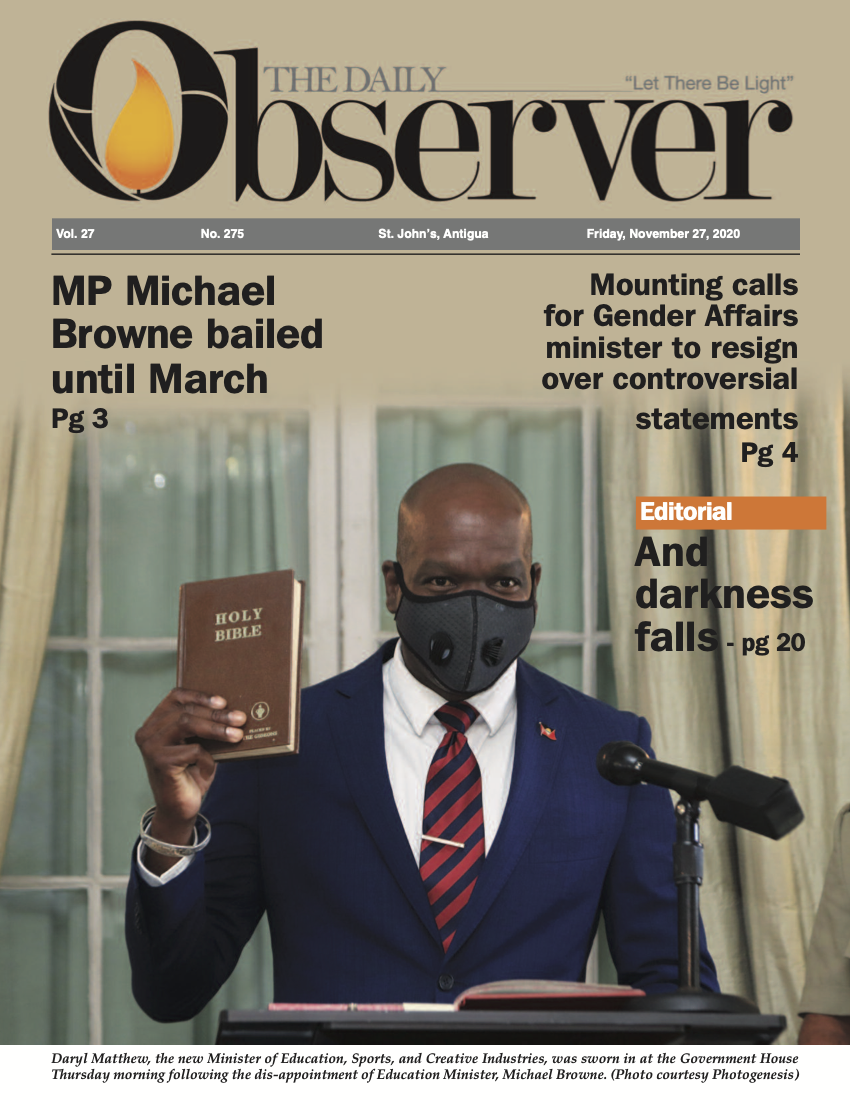