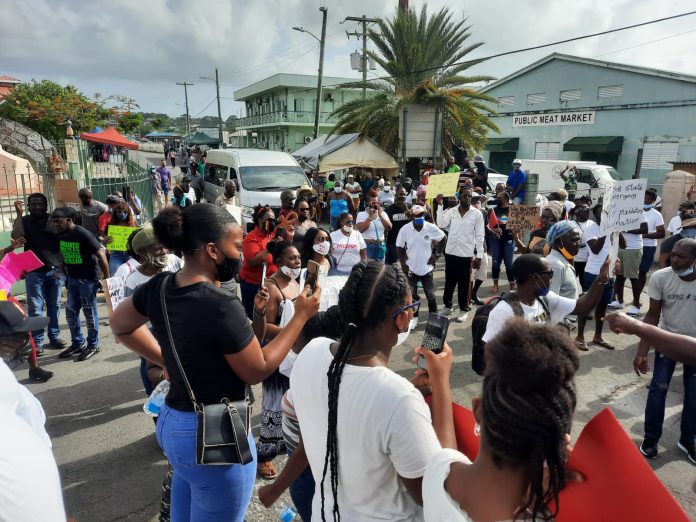 Members of the Freedom Fighters of Antigua and Barbuda group who organised Sunday’s protest could be arrested and charged.

That’s according to the Commissioner of Police, Atlee Rodney, who made the announcement during a press conference yesterday.

“I strongly believe that once the evidence presents itself that they continued to organise a march that was illegal, then they can be charged, and I must add that even in the letter that we sent to them, we told them that Section 14 of the Public Order Act mentions it is an offence to take part in, or lead an unorganised march and some persons can be arrested for that.

“So, once the evidence points to that, I can assure you that some action will be taken,” Rodney stated.

Rodney also mentioned that additional arrests and charges could be made in the upcoming days as police continue to sift through video footage from the protest.

“There are investigations going on right now and more persons are likely to be arrested and charged. We are analysing some of the videos, some of the officers have provided their information and an investigative team has been put in place and more action will be taken against them,” he said.

On Sunday, scores of protestors, led by the group dubbed Freedom Fighters of Antigua and Barbuda, assembled near the VC Bird bust on lower Market Street to demonstrate their objection to Covid-19 vaccination policies, mask-wearing and other protocols.

But that event quickly turned into mayhem as members of the police’s special units released tear gas to disperse the crowd. However, in addition to the protestors, the gas also negatively affected other law enforcement officials and innocent bystanders.

The move prompted outrage from some protestors who began to throw missiles at the police and later set items on fire in the city’s streets.