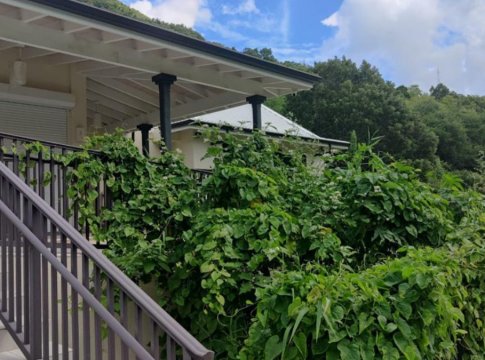 Photos of overgrown vegetation at the Boggy Peak National Park Interpretation Centre site has been making the rounds on social media.

People are questioning why the newly constructed building is not being utilised.

The Department of Environment told Observer that it is waiting for a disbursement of funds from the Global Environment Facility (GEF) for landscaping and other minor work around the Christian Valley facility.

The request was made in July.

This is another setback for the opening of the Centre which was expected to break ground in February 2020.

The Centre is part of the Environment Division Sustainable Pathways Protected Areas and Renewable Energy ((SPPARE)) Project. The building was constructed to have minimal impact on the natural environment and will use solar energy and a 30,000-gallon water cistern underneath the centre’s main floor for water.

Due to the delay, the project has been extended until June 2022 but the department is hoping to get the money as soon as possible, in order to complete it before the grant is no longer valid.

Environment Minister Sir Molwyn Joseph had given a commitment earlier this year, when the site construction was winding down, to assist with landscaping while the department awaits the next disbursement.

The area has since become overgrown by vegetation.

Minister Joseph is currently in Glasgow participating in COP26 but reports are that he will attend to the matter when he returns to Antigua.

A representative of the project told Observer that the building will be cleaned both inside and out once they have funding. Otherwise, they say it is difficult to get people to work without being paid.

The estimated cost of the project is EC$1.5 million.

Boggy Peak is just one part of the Sherkely Mountain Management Area (SMMA) that the department wants to have protected by law.

Meantime, under the PATHWAY 2020 project to develop the SMMA, selection for positions including a manager, rangers and office assistance has already begun.