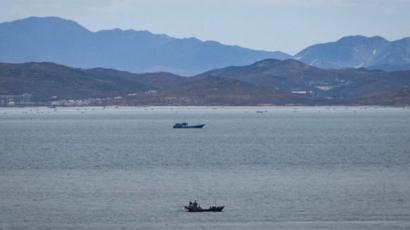 Seoul said the man, who worked for the fisheries department, disappeared from a patrol boat near the border and was later found in the North’s waters.

North Korean soldiers shot him, then poured oil over his body and set it alight, the ministry said. It believed it was an anti-coronavirus measure.

Pyongyang has not commented.

The border between the Koreas is tightly policed, and the North is thought to have a “shoot-to-kill” policy in place to prevent Covid-19 from entering the country.

The incident would be the second time North Korean troops have shot and killed a South Korean civilian. In July 2008, a tourist was shot by a soldier at Mount Kumgang.

What did South Korea say?

The official was on his patrol boat about 10km (6 miles) from the border with the North, near the island of Yeonpyeong, when he disappeared on Monday, the South Korean defence ministry said.

The 47-year-old father of two had left his shoes behind on the boat. It is believed he had been trying to defect, a rare but not unprecedented move.

A North Korean patrol boat found the man, who was wearing a life jacket, at sea at around 15:30 local time on Tuesday, Seoul added.

They put gas masks on and questioned him from a distance before “orders from [a] superior authority” came in that the man be killed. He was shot dead in the water.

North Korean troops then burned the corpse while at sea, South Korean defence ministry officials said, adding that they believed this might have been an anti-coronavirus measure.

What has the reaction been?

President Moon Jae-in called the killing a “shocking” incident that cannot be tolerated. He urged the North to take “responsible” measures over the attack.

The country’s National Security Council said the North could “not justify shooting and burning the corpse of our unarmed citizen who showed no sign of resistance”.

“This military action is in violation of international regulations,” said Suh-Choo-suk, Secretary General of the National Security Council. “We will firmly respond to any action by North Korea that threatens the life and safety of our people.”

At a news conference earlier, South Korea’s defence ministry said it “strongly condemned such a brutal act and strongly urged the North to provide an explanation and punish those responsible.”

Officials said they had done a “thorough analysis of diverse intelligence”, but it was not clear how exactly they had gathered the information.

The military hotline between North and South was cut in June, and the inter-Korean liaison office, which was built to help both sides communicate, was destroyed by North Korea. But South Korean military is known to intercept the North’s radio communications, AFP news agency reports.

North Korean officials may be doing everything they can to ensure the country remains unaffected by the coronavirus pandemic, BBC Seoul correspondent Laura Bicker reports.

Authorities are thought to be preparing for a huge military parade on 10 October to mark the 75th anniversary of the foundation of the ruling Workers’ Party.

“This parade is a huge potential virus risk,” Chad O’Carroll, CEO of Korea Risk Group, a North Korea specialised news service, said on Twitter. “It seems paranoia about that risk is at play with shoot-to-kill rules.”

Pyongyang closed its border with China in January to try to prevent contamination. In July, North Korean state media said the country had raised its state of emergency to the maximum level.

Last month, the commander of the US military’s forces in South Korea, Robert Abrams, said the North had introduced a new “buffer zone” of one to two kilometres on the Chinese border, and that the country had special operation forces in place with orders to “shoot-to-kill” anyone coming across the border.

In the past, North Korea has also returned people who have wandered into their territory. In 2017, state news agency KCNA said officials would repatriate a South Korean fishing boat which “illegally” crossed the border, in a rare humanitarian move.

But North Korea has more commonly been known for handing out severe punishments for rule breaking. The country makes liberal use of the death penalty and has been known to conduct public executions.