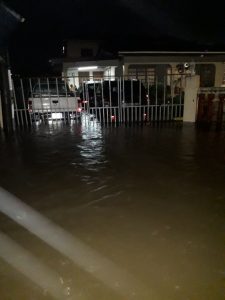 The new Director of the National Office of Disaster Services (NODS) made a detailed report of the readiness of each community for the hurricane season.

The conclusion was reached that the 2022 hurricane season will be very busy based on information from the World Meteorological Organization and the National Met Office.

According to the Cabinet notes, NODS reported on community readiness in the event of heavy rainfall and strong winds. Working with several partners NODS has negotiated for cyclone insurance and the provision of emergency kits.

While storage at NODS Headquarters is adequate, an attempt to pre-position kits at several shelters has not worked well.

There are 64 shelters including a church in Codrington, Barbuda. Several churches that are intended to be used for shelters have bathrooms separated from the sanctuaries; it makes them less safe because use of the shelters’ restrooms would make it unsafe if one has to journey outside during a storm.

A comprehensive report on each of the districts’ drains and bridges that have been examined will be reported to Cabinet.

The NODS Director responded that the NODS is in a position to adequately respond to any disaster which may now occur when asked about their readiness to respond quickly.