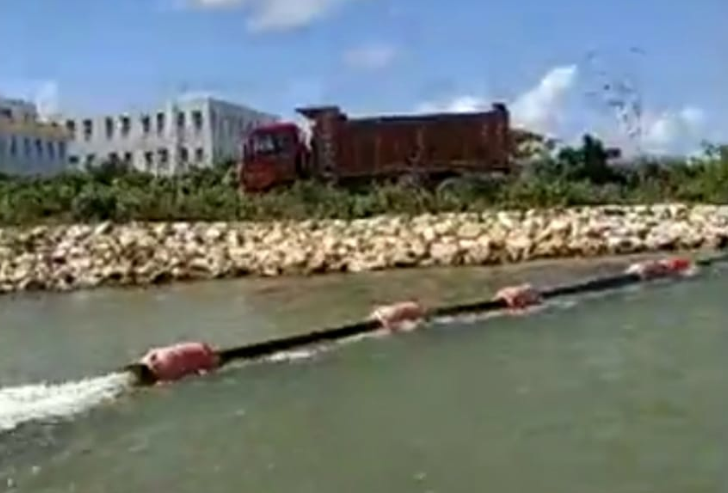 Environment Minister Sir Molwyn Joseph has refuted reports that the developer of the Antigua and Barbuda Special Economic Zone (ABSEZ) Yida Zhang has been dredging off the coast of its Crabb’s site.

“That is absolutely false,” Joseph said, explaining “what I was told by the head of the [environment] department, Ambassador Diann Black-Layne was that Yida is carrying out its work within the rules established and the parameters established. There was one concern and that was the removal of grass from the seabed which they are addressing.”

He, however, went on to say that no assessment had yet been done to ascertain whether there was damage to the seabed.

“No, no. What has happened is that they have to go and check, physically check, speak to the people to determine whatever breaches might be there,” he recalled.

Businessman Foster Derrick shared video footage showing evidence of suction pipes spewing water at the Crabb’s site on November 15, and, when he returned to the scene a week later, they were gone.

Minister Joseph downplayed the matter by saying that the video recording “had great alarm and sensationalism only to see water coming out of the pipes”.

A week earlier, Prime Minister Gaston Browne also commented in an on-site video that the developer was in full compliance with the country’s laws and was awaiting word from the Fisheries Department, the Department of Environment and the Development Control Authority (DCA) to mine sand offshore and to bring it onshore to continue the work needed to complete an artificial beach in the area.

In the prime minister’s video recording, a dredging machine could be seen docked alongside the Crabb’s site where he said the developer is developing “a beautiful beach”.

“Mr Yida has assured me that he continues to follow all the laws and regulations of the country and that the people of Antigua and Barbuda need not bother with the rhetoric, the misinformation that is in the public domain, that there are no violations to date,” he said.

Browne also said that the DCA had written to Yida “out of an abundance of caution” to advise him not to proceed with any dredging.

“He fully understands and he’s complying with all of the laws and regulations of the country,” he added.

Meanwhile, Sir Molwyn has challenged environmental activists to assess other projects constructed within the North East Marine Management Area (NEMMA), including Nonsuch Bay, where he claims that environmental regulations were overridden to create that area within the NEMMA.

“They took out vegetation in order to carry out their project. The same way they cleared the land of all the bush to build buildings, they did that and that is in the NEMMA. I’ve never heard anyone in the environment speak about that,” he told Observer.

“I put the challenge out to them – the environmentalists – let’s get together, go to all the projects where there have been controversy and then we examine Carlisle Bay, Jolly Harbour, all of the projects and then we can do an analysis and see whether or not we were able to do it in a sustainable way where we had a balance – preserving the environment and at the same time creating economic activity,” he continued.

The 2,000-acre development has been plagued with controversy since ground broke in 2015. The developer Yida Zhang has been flagged numerous times for working without permission from relevant authorities.