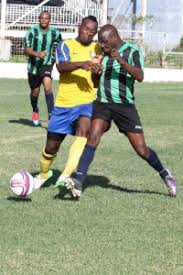 National striker, Peter “Big Pete” Byers shared his reasons for remaining with his home team, SAP FC throughout the years.

Upon his return to the country following a professional career overseas, Byers briefly played for Parham FC in 2010, before the Bolans-grown footballer returned to his roots.

The former Antigua Premier League champions last year saw themselves being relegated to the ABFA’s First Division where they remain following the postponement of matches due to Covid.

Byers, who says that he received a number of offers at that time last year, explained why he never left.

“When I came from Montreal first, Asot [Michael] gave me a great offer, so then seeing SAP not doing well, and I had to play against SAP it made me feel a way. So, after that, I returned back home to SAP and I was still getting offers from almost all the clubs in the Premier league. Clubs that just came into the  Premier League, even clubs from lower divisions offered me a lot, but it’s my community, I love my community so much, so I decided to stay with them and not play with anyone else,” said Byers.

He was speaking on the Good Morning JoJo Sports show last week when he opened up about his professional and national career.

In the interview, Peter revealed that it was because of a lack of proper guidance by those charged with negotiating on his behalf as the main reason why his professional career remained stagnant for some time and then ended.

Byers played professionally in Trinidad and Tobago for San Juan Jabloteh.  He joined Montreal Impact of the USL First Division on 27 August 2008. In the 2009 season, he was briefly loaned to Trois-Rivières Attak in the Canadian Soccer League, where he appeared in 2 matches and scored one goal.

On 3 August 2010, Byers was suspended for breaching a team rule, and a week after his suspension was issued, the Montreal Impact announced the release of Byers from his contract for breaching club policy.

Byers returned home to Antigua to join Parham in the Antigua and Barbuda Premier Division, before having a brief stint with the Antigua Barracuda FC in the USL Professional Division.

During that stint he scored four goals in seven games. He then transferred to the Los Angeles Blues on 3 June 2011, and in the 2012 USL Pro season, Byers signed for Central FC of the TT Pro League.

Despite his mistakes, he continues to encourage the youths to stay focused, stay humble and work hard to reach their goals.