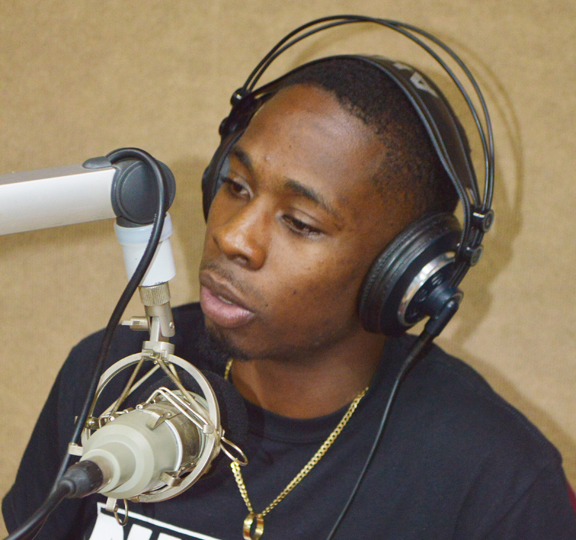 By Neto Baptiste
US-based national sprinter Cejhae Greene, has commended both the government and the National Olympic Committee (NOC) for the financial support he has received over the past two years, adding that it has assisted tremendously throughout the covid-19 pandemic.
“I know for a fact that the government has been working with me for the past two years and they have been really kind and they support wherever they can. I must give them the utmost respect because even though we are going through what we are with Covid and trying to keep the country afloat, they have still been able to contribute and help me stay afloat as well, and probably without them I would be in dire straits. So I really have to thank them. The government has really been supportive,” he said.
“The Olympic association has been really supportive as well because they still have the Olympic Solidarity [funds] coming through and that keeps food and stuff coming in.”
The athlete recently returned to action over the weekend, competing in his first event since the coronavirus outbreak earlier this year.
The global lockdown of sports has, however, had a negative financial impact on many professional athletes, Greene included. The sprinter said not much has changed but that the kindness of others like his coach, Ken Harnden, has gone a long way in allowing him to weather the storm.
“Now that we are competing a little bit more it is probably a little more strenuous, but you get by each month, as long as you have somewhere to sleep, eat and train. Coach has been really very big throughout all of this and he even waived his coaching fees and stuff like that and say don’t worry about it, we’ll just work it out and that was very big of him,” he said.
“It’s been the same; it’s been very hard especially when you’re going to compete because, for instance, over the weekend we went to Atlanta so we had to drive down to Atlanta and then we had to get an Airbnb and stuff like that,” he added.
As for the athletics association, Greene said that although they may not be able to assist from a financial standpoint, they have taken a keen interest in his well-being.
“I obviously hope and wish they could do more but they have been really good from an emotional standpoint in terms of checking up and see how much they could do, but honestly, I don’t think they could do much financially. I can’t speak for the athletics association from that standpoint but I know that Mrs Daley and Mr Daley [Heather and Teddy], they would check up on us almost on a weekly basis,” he said.
Greene clocked 10.38 seconds at the America Track League event held in Atlanta, Georgia on Saturday, capturing the 100 meters event.