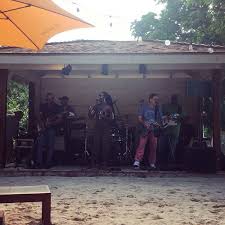 Covid-19 has given local performer and guitarist Paddy Prendergast an additional duty while strumming his guitar of keeping one eye on his dancing patrons.

The musician whose band – Itchyfeet – has played at numerous venues during the pandemic, is a supporter of the coronavirus health and safety regulations, but he believes that too many people are beginning to let down their guard.

“Everyone is looking to the government for direction but we’re all fairly sensible people. We know the things that we can do for ourselves that maybe go over and above what the government says,” he told Observer.

“In general, I think the government has done a reasonable job – maybe they’ve been more lucky than clever,” he remarked.

Prendergast said that people, on the other hand, can do more to reduce the spread of the virus.

The number of active Covid-19 cases increased to 22 this week and on Wednesday, a 95-year-old man died as a result of complications from the virus.

In response, the government wants to introduce stricter measures next week, including one that will make it unlawful for people to visit offshore islands and another that will reduce the number of attendees at weddings and funerals.

These measures come one week after Cabinet Spokesman Melford Nicholas shared that his colleagues were concerned about increasing protocol breaches in the English Harbour area.

Prendergast and his band were performing at Catherine’s that night and he said the health official had every reason to end the festivities.

“They came in after the band had stopped playing. We stopped before 6’oclock and they came in after 6’o clock and what they saw, they didn’t like. On one table there were 20 people, but those 20 people were in a bubble from a boat, all having been tested,” the musician said.

“I was there with him [the health officer] before he walked in; I saw exactly why he closed it down and I don’t blame him for a second. He saw 20 people jumping up and down on a mattress and the place pretty full and thought – hang on, this doesn’t look right, close it down,” Prendergast recalled.

According to him, people were told that they could dance at their tables but not in front of the band. For the most part, patrons didn’t mind, he said, but “when you mix alcohol with a few idiots, then occasionally you get people who forget that they have to do things”.

The musician said since reopening after the lockdown, Catherine’s Café had been generally compliant but shared that lately things were getting out of hand.

“I think in general, the hotels seem to be managing it real well, the ones we’ve been in, particularly Mill Reef. But I think in English Harbour, generally, the protocols’ conditions have been a little bit wooly [confusing] from place to place, and it’s not just the venue owners, but it’s the people living in English Harbour.

Apart from the English Harbour restaurants, Prendergast said other establishments across the country are also guilty of exhibiting similar behaviour.

He also addressed the disparity in the treatment of returning nationals and tourists, and has called on the administration to allow equal treatment for both parties.

Prendergast also believes that imposing additional requirements for tourists, introducing on-the-spot fines for restaurant owners, shortening curfew hours and establishing clearer rules and who they apply to would help reduce the transmission of Covid-19.

“The terms needed to be much clearer from the various restaurants. I’m not sure that any of the places were overcrowded because I don’t know what numbers they were allowed. It may have looked overcrowded but [there are] no signs saying there can only 50 people here [or] only 100 people there,” he said.

“We’re all involved in this and it’s very well to sit on your high and mighty chair and blame restaurant owners in English Harbour, or expats or tourists, or whoever else, but one way or the other everyone is under pressure and it really is a mark of our character how we get through this pressure together,” he added.

Alex Grimley, owner of Catherine’s Café, told Observer the restaurant reopened on Wednesday after writing a new set of protocols alongside health officials, which will see a total ban on dancing and no groups larger than 12 allowed.

“Our management team have been as compliant as possible but ultimately we are in a new era where we’re having to tell adults how they can and can’t behave,” Grimley said.

“The health official took umbrage at one particular group who were dancing in a private area in their own bubble. The new rules we have put in place were suggested not by the Central Board of Health but by us,” he added.