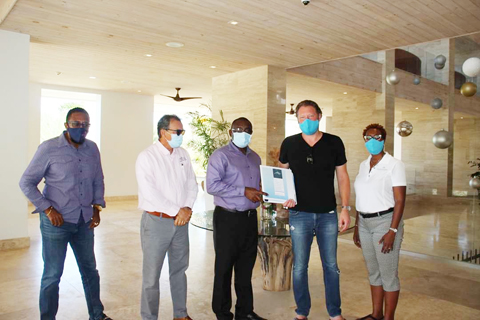 A pandemic that the world has been experiencing – the likes of which it has never seen before – requires that plans for the re-opening of borders be comprehensive.

Thus, as Antigua and Barbuda prepares to let tourists onto its shores in few days, hotels and other tourism entities are working tirelessly to prepare for their reopening.

Minister of Tourism Charles Fernandez has been visiting some the island’s hotels and just this week, Fernandez said he was blown away by the preparations being put in place by the Hodges Bay Resort and Spa.

“For me, what I was mostly impresses with was the fact that they, for example, have stickers that they put on the door; once there room is clean there’ll be a seal that they’ll put on the door so no one will enter before the guest actually gets in.

“When a guest leaves the room, for example, there’ll be a sign on the door; that room will be untouched for 48 hours so if there is any kind of virus, that would give it time to pass, apart from the protocols and the chemicals that will be used by the cleaners,” Fernandez shared.

The Tourism Minister further highlighted that a manual has been developed by the authorities at the resort called “Viral Mitigation Policies and Procedures.”

That document is said to detail “all standard operating procedures to be adopted by the property in the event of any viral outbreak” and “covers policies to guide the actions of staff in areas of guest management, cleaning and disinfecting, room management, laundry operations, and food and beverage,” a press release of the Ministry of Tourism explained.

A copy of the manual was presented to the Permanent Secretary in the Ministry of Tourism and Investment, Walter Christopher, who was a part of an official delegation inclusive of Fernandez and CEO of the Antigua and Barbuda Tourism Authority, Colin James

Moreover, the Ministry disclosed that the hotel has already put the requisite nursing station in place as well as measures to endure that all staff members complete an online health checklist prior to leaving for work.

That checklist will be instantly screened to prevent sick staff members from attending work while exhibiting symptoms of a viral infection.

According to Jeff Wellemeyer, CEO and Chairman of the resort, the management is “quite cognizant of the extenuating circumstances caused by the onset of Covid-19 worldwide and sought to adapt the best practices of leading global corporations such as Disney who enlisted the experts of the John Hopkins University to compile their list of operating protocols, “ the release stated.

The two-year-old resort was said to be the home to Instagram influencers who were in private accommodation at the hotel during the country’s lockdown.

Twenty staff members also reportedly stayed at the resort upon being given the option.

However, according to a spokesperson from the Ministry of Tourism, there are no guests at Hodges Bay now. Once inspected and certified by the ministries of tourism and health, the resort should be welcoming its first handful of guests next week.