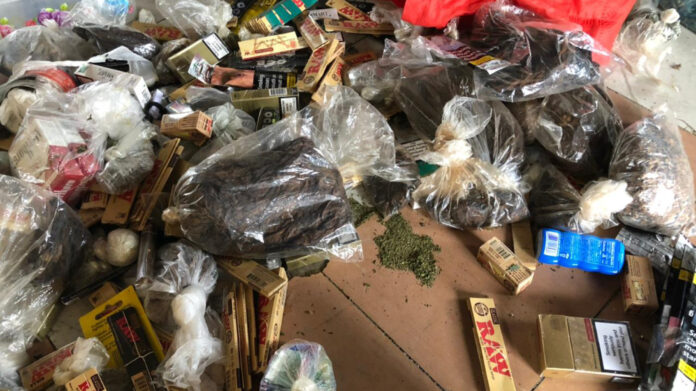 Members of the public are being urged to desist from smuggling contraband into Her Majesty’s Prison (HMP), after a raid at the facility yesterday revealed a significant number of illicit items, including more than 60 cellular phones.

“What we’re seeing here is clearly a violation of the prison rules and regulations, because when you look at some of the items that are seized … they are not part of what an inmate should have at HMP,” police spokesman Inspector Frankie Thomas told Observer.

Among the items confiscated during the raid – which was a collaborative effort between the police and the prison authority – were smoking paraphernalia (including portions of cannabis and tobacco or ‘high leaf’ as it’s commonly called, along with rolling paper and lighters), alcohol, electronics (including more than 60 cellular phones, portable transformers, laptop computers, a TV set, fans, speakers, hot plates, kettles and blenders), cooking equipment (pots and pans) and perhaps most importantly, weapons (including machetes, knives, screwdrivers, scissors and hammers).

Investigations into the findings have commenced, but it is already clear that the majority of the items originated outside of the prison walls. Those same walls, in a bit of irony, are a constant source of pain for the prison authorities.

For years, much of the contraband that enters the prison is thrown over the walls by persons on the outside, working alongside inmates on the inside, and several people have been arrested and charged for those actions.

Thomas lamented the long-burdensome situation and called on the public to discontinue the practice, which could have some serious repercussions.

“I want to be on record to ask members of the general public to refrain from engaging or associating with this type of unlawful behaviour. Clearly, what you’re doing here is [furnishing] criminals with weapons, [which they] will turn around and use to injure each other at Her Majesty’s Prison.

“I’m quite certain that as a responsible parent [or other] family member of these inmates, you would not want to know that you would have smuggled a sharp object into HMP, that [ends up] causing injury to someone who you may have incarcerated there.

“So, we should be more responsible, we should [strive to be] law-abiding citizens and really support the efforts of the police, and more so the prison authority, by refraining from smuggling these prohibited items into HMP,” he stated.

These kinds of seizures are certainly not new to the prison, as the authorities constantly execute random searches with the hope of reducing the amount of contraband, and therefore the potential of danger to inmates and prison officers alike.

Back in 2020, a similar raid on the facility revealed a number of makeshift weapons apparently crafted by inmates as a means of defending themselves against fellow inmate aggressors.

This find was considered evidence of a systemic problem, and prompted Public Safety Minister Steadroy Benjamin to convene an emergency meeting with prison officials to discuss the severity of the matter.

According to Thomas, that systemic problem is taking away from one of the main purposes of the prison facility, which is to rehabilitate convicted criminals.

“I think we should be working more toward rehabilitation than having these items being trafficked into [the prison], because at the end of the day, the intent is to use HMP as a facility to help rehabilitate these inmates who, for some reason or the other, would have found themselves on the opposite side of the law,” he said.

“There is always hope … the intent here is not to see someone punished or spending any undue length of time in HMP, but to use it to help them rehabilitate themselves, to bring them to that point where they can come back to society and make themselves useful.”

The lawman said police are mindful of the prison authorities’ plight, pledging to provide support wherever possible toward the safety of the prison.

“Whatever the police administration can do to assist the prison authorities in ensuring that the facility remains a safe place for the inmates, we are more than willing and ready to lend that level of assistance,” he declared.

In recent years, some improvements have been made to the prison, including surveillance and perimeter fencing, but it is largely accepted that the struggles are likely to continue until a new, modern prison facility is built.