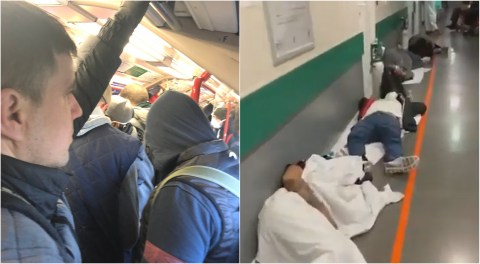 (Metro.co.uk) – Images of people being treated in hospital corridors in Madrid should serve as a reminder to people in the UK of what is about to come as thousands refused to stay at home this morning.

Despite the warnings, the Central Line was packed with commuters unable to stay two metres away, against government advice, as the UK’s coronavirus outbreak is set to get even worse.

Transport for London (TfL) urged people not to travel unless they have a critical job, but trains and tubes remained packed this morning.

The crowded tube trains are even more disturbing when compared to images emerging from Italy, which the Prime Minister Boris Johnson said we are only a matter of weeks behind.

A man wearing a protective mask was found lying unconscious on the ground near a bus stop in Rome on Sunday. He was carried away by paramedics as the country, ravaged by the world’s most deadly outbreak of Covid-19, recorded 651 deaths in one day, taking the death toll to 5,476.

It’s not known if the man has coronavirus, but it demonstrates just how stretched the Italian health services are at the moment.

He wrote on Twitter: ‘Still heavy loading on some Tube lines this morning making social distancing impossible. This is endangering the health of the vital workers who have to use the system. ‘The Government must act now to ensure only ESSENTIAL journeys are made.

‘I’m being sent pictures of crush loaded platforms at some Jubilee line platforms this morning. Drivers and other frontline staff are furious.’ TfL suspended the Circle line and Waterloo & City line, and reduced frequencies on other parts of the Tube network.

Bus services have also been cut. Despite repeat warnings, crowds flocked to public places in their thousands over the weekend, with worrying pictures showing people queueing up for food stalls in busy park markets, and seaside towns filled with visitors.

Health Secretary Matt Hancock has warned the Government ‘may have to take further action’ if people continue to flout social distancing rules of staying two metres away from each other.