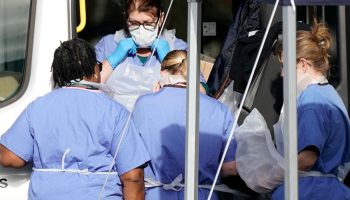 (Metro.co.uk) – A major London hospital declared a ‘critical incident’ after running out of ICU beds due to a surge in coronavirus cases.

The situation has been described as ‘f***ing petrifying’ by a senior hospital director in the capital, where the scale of the disease is weeks ahead of the rest of the country.

In a message to staff, Northwick Park Hospital in Harrow said it has no critical care capacity left and has contacted neighbouring hospitals about transferring patients who need critical care to other sites.

The email was understood to have been sent on last night and the incident was stood down after around 24 hours.

The message, seen by the Health Service Journal (HSJ), said: ‘I am writing to let you know that we have this evening declared a ‘critical incident’ in relation to our critical care capacity at Northwick Park Hospital. This is due to an increasing number of patients with Covid-19.

‘This means that we currently do not have enough space for patients requiring critical care.

‘As part of our system resilience plans, we have contacted our partners in the North West London sector this evening to assist with the safe transfer of patients off of the Northwick Park site.’

Six people have died of coronavirus at Northwick Park Hospital, which is ran by the London North West University Healthcare Trust.

A senior director of a different acute trust said outer London was being hit hardest by bed shortages and a surge in coronavirus cases.

‘The trusts in outer London seem to be hit much worse at the moment, probably about two weeks ahead of the rest of the country’ the source told HSJ, citing Barnet, Lewisham and Greenwich, Epsom and St Helier, North Middlesex and Hillingdon as ‘struggling areas’.

The trust boss added: ‘Given we’re in the low foothills of this virus, this is f***ing petrifying. The thing people aren’t really talking about yet is that we are going to have to quickly agree some clinical thresholds for admissions to intensive care.This is what the Italians have had to do.’

In Italy, a video from the hardest-hit hospital at the epicentre of the outbreak showed the catastrophic scale of the health crisis and the impact it was having on the country’s health service.

Doctors allowed Sky News to film the over-stretched Papa Giovanni XXII to send a stark warning to the UK: ‘Get ready’.

It is understood that hospitals are in talks with care comissioners to get more people out of hospital and into the community. However, care homes are refusing to take patients back unless they’ve been tested for covid-19 – something that’s not currently an option under government guidelines due to a shortage of tests.

A spokeswoman from the trust that runs Northwick Park Hospital said critical care capacity for patients with coronavirus ‘is being organised on a cross-London basis’ to allow hospitals and organisations to work together ‘to deliver the best possible care for patients’.

She added: ‘This kind of coordinated, flexible response is one of the NHS’s strengths but with staff pulling out all the stops they need the public to play their part too, by following the expert guidance on washing your hands, staying at home and using health services responsibly.’

This comes as the UK’s coronavirus death toll jumps to 177 after another 40 patients died.