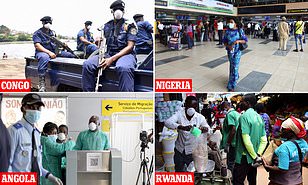 (Daily.co.uk) – Lockdowns have begun across Africa as coronavirus cases rose above 1,000.

Nigeria announced it is closing airports to all incoming international flights for one month in the continent’s most populous country.

Rwanda said all unnecessary movements outside the home are banned for two weeks as of midnight except for essential services such as healthcare and shopping.

The East African nation, which has 17 cases, has told all public and private employees to work from home. Tunisia imposed its own lockdown earlier.

Uganda is closing its borders to all but cargo.

Ethiopia said all arriving passengers will face mandatory quarantine as of Monday. Somalia said it is lifting its ban on international flights for two days so stranded citizens can come home.

The announcement came shortly after Nigeria reported its first cases in the capital, Abuja.

The Nigerian Civil Aviation Authority said ’emergency and essential’ flights are exempt from the ban that starts on Monday.

An adviser to president Muhammadu Buhari said Nigeria also plans to suspend all passenger rail services from the same day.

Also in attendance was president Mokgweetsi Masisi of neighbouring Botswana, which this week suspended international travel by all government employees. Namibia has three cases of the virus.

He announced a national disaster even before his country confirmed its first virus case on Friday. On Saturday, his country announced the first case in the capital, Harare.

Africa now has more than 1,100 cases, the Africa Centres for Disease Control and Prevention said.

Burkina Faso now has the most virus deaths of any country in sub-Saharan Africa. The West African nation has one of the highest caseloads on the continent with 64.

Several government ministers in Burkina Faso have tested positive, including the minister of foreign affairs. On Friday, president Roch Marc Christian Kabore announced the country’s two international airports would close for two weeks, with exceptions for military and cargo.

Burkina Faso is one of Africa’s most fragile states with a growing humanitarian crisis caused by attacks linked to Islamic extremists.

According to a government response plan seen by The Associated Press, emergency teams are not trained for a respiratory disease outbreak and do not have appropriate protective gear.

There is also insufficient screening at borders. None of Burkina Faso’s 44 high-flow entry points have the required personal protective equipment, and only 23% have coronavirus screening devices.

Jerry-Jonas Mbasha, cluster coordinator for the World Health Organisation in Burkina Faso, said he was ‘much worried about what might happen in the next one week, two weeks from now’.

Most people only experience minor flu-like symptoms from the coronavirus and recover within a few weeks, but the virus is highly contagious and can be spread by those who appear well.

It can cause severe illness, including pneumonia, in some patients, particularly those with underlying health problems.

More than 275,000 cases have been confirmed globally, including over 11,000 deaths, according to a running tally by Johns Hopkins University. At least 88,000 people have recovered.

In Nigeria, which just three weeks ago announced the first coronavirus case in sub-Saharan Africa, authorities said that first patient, a man who had travelled from Italy, is now fit to go home.

In Kenya, health officials continued to disinfect crowded markets in the capital, Nairobi, trying to stop the virus’ spread.