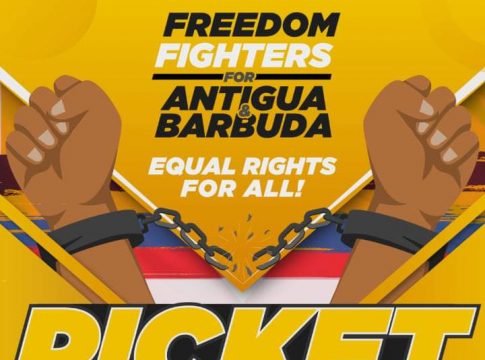 The police are warning residents who are preparing to once again take to the streets later today in protest of current Covid-19 measures, to exercise caution.

The action group, Freedom Fighters of Antigua and Barbuda, announced another picket to express their dissatisfaction with what it terms government’s heavy-handed methods to manage the spread of the virus.

Police yesterday released a statement advising the protestors to adhere to the protocols.

“While the administration acknowledges the right to a peaceful protest, the organisers behind this action are reminded of the State of Emergency, and as such, the protocols under the Public Health Act (Infectious Disease) Amendment Regulations of 2020 will be strictly enforced. The public is further reminded that public gatherings are now restricted to 10 people per any given space, and the mandatory wearing of face masks and social distancing guidelines must be adhered to,” the statement said.

The communiqué also advised the organisers about the heightened activity in the city and of their responsibility to ensure that no issues arise.

The protest is set to take place from 3 pm today – once again at the VC Bird bust at lower Market Street in St John’s, a site where just two weeks ago, a similar picket ignited a stormy response from police who dubbed it an illegal gathering and moved in with riot officers, tear gas and rubber bullets in a bid to disperse protestors.

“The Administration is further appealing to the organisers to be responsible in their actions, and take into consideration the location they intend to hold their protest action. The location is an area of heightened commercial activity on Saturdays, with both pedestrian and vehicular traffic. The police are expecting the full cooperation and support of the entire public going forward.”

The August 8 event resulted in a string of arrests – the majority for throwing missiles, and two, for organising the ‘illegal event.’

Since that day however, the group has staged a protest outside the Prime Minister’s office on Queen Elizabeth Highway, and released a flyer earlier this week indicating their intent to take to the streets once again.

The flyer advertising the picket cites coercion, discrimination and abuse of power among the reasons for this latest gathering.  They are inviting all to join what they say is a stand for human and civil rights.