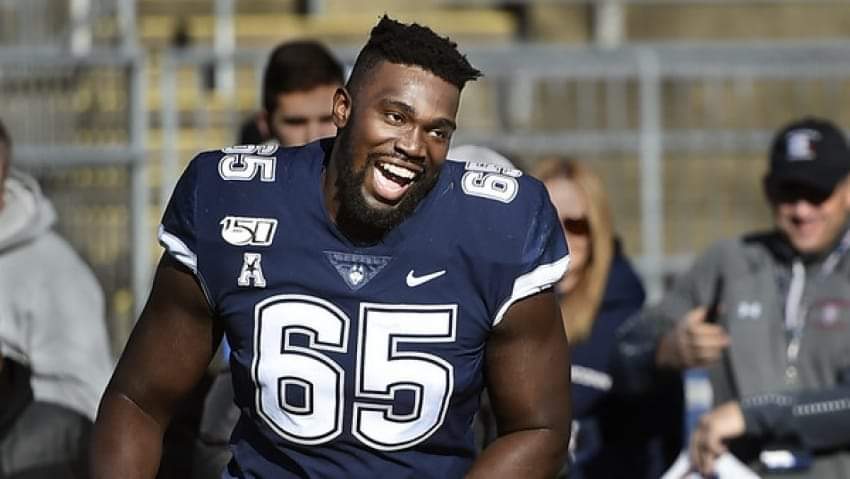 The New York Giants selected Jamaican Matt Peart, a 318-pound tackle out of the University of Connecticut as the 99th overall pick in the NFL draft on Friday and he couldn’t be happier.

Standing at six feet and seven inches, Peart’s first love was basketball and the New York Knicks, but when he moved from Kingston, Jamaica as a child everything changed.

Peart moved to New York and went to Governor’s Academy courtesy of the Oliver Scholars programme for high-achieving students. There he fell in love with American football, and most importantly, the Giants.

“Just watching them on the TV, just the culture and everything the Giants stand for was something that was appealing for me as a young kid,” said Peart in an interview with giants.com’s Dan Salomone.

“Especially growing up, especially that moment in high school when they had that Super Bowl (XLVI) win my freshman year. That was a very, very fun time for me,” he said.

The offensive tackle is a fan of Eli Manning and while he won’t be protecting him, missing out on that honour by a year, at least he will have the opportunity to play in front of the same fans.

“My favourite player, my favourite Giant always would be Eli Manning, for sure,” Peart said. “The man is just tough, tough as nails. I respect his game and I just respect everything he does for the game. You know, he’s definitely my favourite Giant, 100 per cent.”

At his height, it isn’t surprising that Peart grew up playing basketball in the Bronx where he lived, especially because of how few green spaces there are for playing a game like American Football.

“You know, Jamaicans call it ‘The Concrete Jungle,'” he said. “So it’s easier to pick up a ball and shoot some hoops because there weren’t really that many fields open,” he said.

When Peart went to Governor’s Academy he played both sports but soon found his love for American Football greater.

Playing both sports has helped him both physically and technically.

“I feel like when it comes to basketball, you have to have real fine footwork,” said Peart.

“I really feel like that helped correlate on the field when it comes to football. Being a post player, you have to be able to have good footwork to work in the post. It’s just what you have to have. I really feel like that helped me correlate over to football. Just being a tough and dominant player in the post as well helped me be a dominant football player as well.”

At 318 pounds, Peart still paints a lean, very athletic figure, not at all what you would expect from somebody his size.

“It’s rare to describe someone as 315 pounds and skinny, but that’s what he is,” said Giants coach Joe Judge.

According to the coach, Peart’s raw materials leave him with a lot of improvement still to be made.

“He’s got tremendous work ethic, he’s got a great attitude. I think we are going to see a lot better football in the future than we’ve seen from him already. That’s what makes us really excited,” he said. (Sports Max)