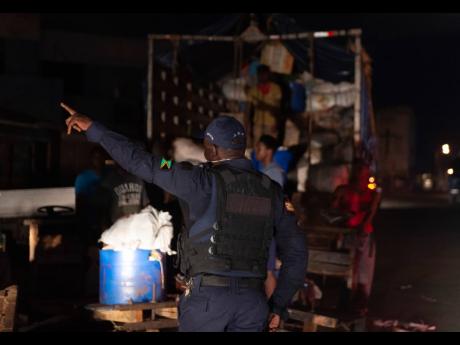 A 24-year-old west Kingston man says that he was forced to do push-ups by lawmen who accosted him last Friday when he broke the island-wide nightly curfew.

The man admitted that he was on the road sometime after 10 p.m., because he had left his home to buy something for his babymother.

He told THE STAR that as he was walking back to the community with the scandal bag in his hand, a police vehicle pulled up behind him, and one of the lawmen jumped out.

“Him jump out and tell me fi give him ‘a 500’. Me neva know weh him mean so me tell him seh me nuh have nuh money, a run me run go buy something fi me babymada. Him seh ‘Hey bwoy, yuh too lie man … yuh gyal gone sleep long time. Drop and gimmie 500 before me lock yuh up and charge yuh’,” he said.

The man said that he dropped the bag and started doing the push-ups.

“The one outside start seh ‘Yuh ready fi this man? Add 100 pon dat’. Dem time deh me start bawl cause me just a hear him and me nah look up, so me neva know wah him did a go do next,” he said.More in News

After a while, he said the lawman ‘draped him up’ and said “Nobody nuh fi deh pon the road after 6 o’ clock. If we ketch yuh out yah again, yuh nah see back yuh yard”.

He said that he was then ordered to run back to his home. “And a dat me do … me nuh stop run till me reach. Me not even look behind me,” he said.

There have been numerous videos circulating online that show law enforcers instructing citizens, allegedly found in breach of the curfew hours (6 a.m. to 6 p.m.) to perform strenuous activities like push-ups or sprints along roadways.

Dahlia Garrick, deputy superintendent of police, told THE STAR there have been no reports of such activities. She added, however, that such actions by police go against their duties and obligations.

“A breach of any law of the land is not a breach against a police, so it should be guided by what the law says. And provision is not made in law for police to be exacting any punishment on anyone. If someone commits an infraction, there are legal processes that should be followed and adhered to, and it must be in keeping with the rules and guidelines of the law,” Garrick said.

“Our members are guided by three percepts: respect for all, adhering to the rules of law, and being a force for good. If it doesn’t fit into those percepts, it simple means it shouldn’t have happened,” she added. (Jamaica Star)