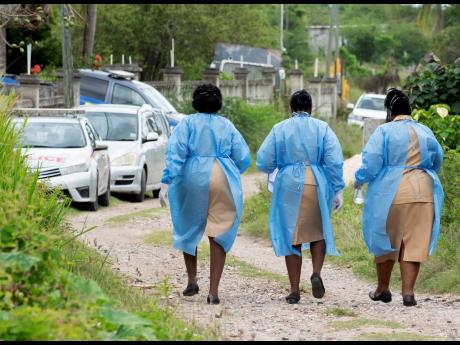 (Jamaican Gleaner) – A “number” of first responders in Jamaica including doctors and nurses have tested positive for the coronavirus disease 2019 (COVID-19), the health ministry has disclosed.

Health and Wellness Minister Dr Christopher Tufton could not give a precise figure but acknowledged that they are not listed among Jamaica’s 19 confirmed cases.

“There are a number of persons who, having dealt with a patient, subsequently tested positive,” Tufton told The Sunday Gleaner yesterday.

Additionally, he said a number of “frontline people” have been quarantined because they were exposed to the virus.

“There have been more nurses and doctors. We have had the doctor who initially looked at Patient One and his assistant who had to be quarantined and we have had one or two other cases,” he disclosed.

The health minister, who has been leading Jamaica’s pushback against the spread of the respiratory ailment, said so far, there has been no reason for him to get tested. Tufton admitted that he had visited Bull Bay, the St Andrew community now under quarantine because of its link to at least two confirmed COVID-19 cases, but said he has not experienced any of the symptoms.

“I didn’t go into the actual zone. I was really at the checkpoint where the police and soldiers were. I would say that I have not put myself into the high-risk category to date,” he explained.

“As the minister, I would come in contact with a number of persons who would sometimes be at risk, but we try to minimise that as best as possible.”

TUFTON WILL TEST IF NECESSARY

Tufton was quick to point out, however, that he would not hesitate to get tested “if I put myself at risk” or detected any preliminary symptoms.

The novel coronavirus outbreak in the country has resulted in the death of a 79-year-old Jamaican man who lived in New York City, in the United States, and had visited relatives in Corn Piece Settlement, Clarendon, while on the island last week. The area has since been quarantined.

The health minister disclosed, too, that medical professionals tasked with treating patients infected with the infectious respiratory disease and those manning quarantine centres are being “separated from their normal family members for a period”.

Further, he indicated that depending on the extent of their roles, health workers who provide treatment for COVID-19 patients are kept away from their normal duties. He said this was part of the efforts to ensure that they are “not vulnerable themselves or subject to contaminate anyone”.

“We are always mindful of anyone in the line of duty who are sufficiently exposed to recommend quarantining of these individuals and it has been done,” Tufton said.

“Our frontline personnel are always at risk as they carry out their duties. I think they understand because this is not the first time the health system is dealing with infectious diseases, so there is a protocol to guide this.”