Iraqi forces have retaken around 30 percent of west Mosul from Islamic State militants, a commander of the elite Counter Terrorism Service (CTS) said on Sunday, as soldiers pushed further into the jihadists’ territory.
Federal police and Rapid Response units said they had entered the Bab al-Tob area of the Old City, where the fight is expected to be toughest due to narrow alleyways through which armoured vehicles cannot pass.
The militants are vastly outnumbered and outgunned by Iraqi forces backed by a U.S.-led coalition and are defending their last major stronghold in Iraq using suicide car bombs, snipers and mortars.
As many as 600,000 civilians are trapped with the militants inside the city which Iraqi forces have effectively sealed off from the remaining territory that Islamic State controls in Syria and Iraq.
CTS troops stormed the al-Jadida and al-Aghawat districts on Sunday, Major General Maan al-Saadi told reporters in Mosul, saying the militants were showing signs of weakness despite initial “fierce” resistance.
“The enemy has lost its fighting power and its resolve has weakened. It has begun to lose command and control,” he said, adding that around 17 out of 40 western districts had been retaken. 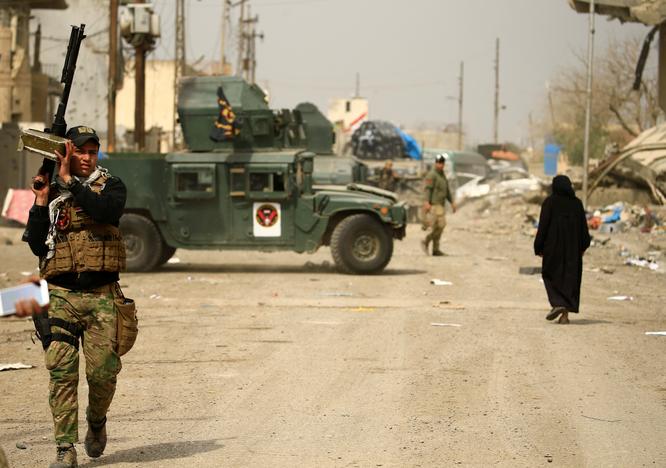 Saadi said he expected it would take less time to recapture the western half of the city than the east, which was cleared in January after 100 days of fighting.

More than 200,000 Mosul residents have been displaced since the start of the campaign in October, of which more than 65,000 fled their homes in the past two weeks alone, according to the International Organisation for Migration.
In the Mansour district, from which Islamic State was driven several days ago, residents collected aid brought by volunteers from east Mosul while helicopters circled overhead, firing heavy machine guns and missiles at targets in the city.
MASS GRAVE UNEARTHED
It is three weeks since Iraqi forces launched a campaign to recapture districts west of the Tigris River that bisects Mosul.
A federal police spokesman said his forces along with the Rapid Response division, an elite Interior Ministry unit, were now around 300 metres (yards) from the Old Bridge — one of five that connected west Mosul to east. The southernmost two are already controlled by Iraqi forces.
Losing Mosul would be a major blow to Islamic State. It is by far the largest city Islamic State has held since the group’s leader Abu Bakr al-Baghdadi proclaimed a caliphate spanning Iraq and Syria from a mosque in Mosul in the summer of 2014.
The group is expected to pose a continuing threat, reverting to insurgent tactics such as bombings.
As an array of forces dismantle Islamic State’s self-proclaimed caliphate across Iraq and Syria, more evidence is emerging of the war crimes committed by the Sunni Islamist militants, who targeted Shi’ite Muslims and religious minorities as well as opponents from their own sect.
A Shi’ite paramilitary spokesman said on Sunday a mass grave had been found containing the remains of “hundreds” of mainly Shi’ite inmates who were killed by Islamic State overran the Badush prison in June 2014.
The Iraqi army and a Shi’ite paramilitary group called the Abbas Division recaptured the Badush area in recent days as they cut remaining Islamic State supply lines to Mosul, completing the encirclement of the city.