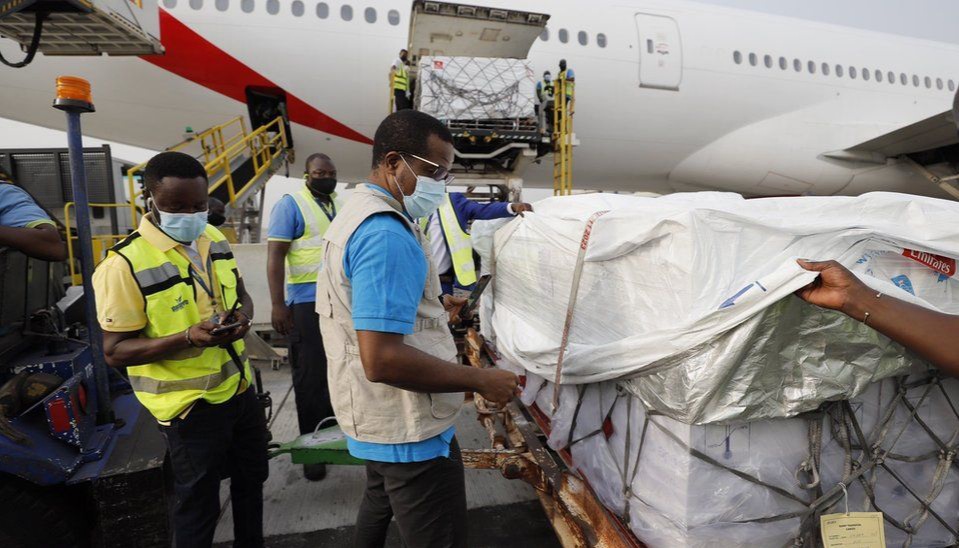 Ghana has become the first country to receive coronavirus vaccines through the Covax vaccine-sharing initiative.

A delivery of 600,000 doses of the AstraZeneca vaccine arrived in Accra on Wednesday. The first recipients are due to be healthcare workers.

The Covax scheme aims to reduce the divide between rich countries and poorer nations unable to buy doses.

The programme is planning to deliver about two billion vaccine doses globally by the end of the year.

Ghana was chosen as the first recipient after promising quick distribution.

The vaccines delivered to the Ghanaian capital were produced by the Serum Institute of India. The AstraZeneca vaccine, developed with Oxford University, has been approved by the World Health Organization (WHO).

Vaccinations are expected to start in Ghana next week, and, as well as health workers, those over 60, people with underlying health conditions, and senior officials are due to be prioritised.

Many nations in the developed world, which began their own vaccinations months ago, have faced criticism for buying or ordering more vaccines than they need.

But many of those countries placed orders for doses with pharmaceutical companies before knowing whether the vaccine in development would be effective. They were hedging their bets – placing multiple orders in the hope that at least some of them would work out.

The UK, which has ordered 400 million vaccine doses and will have many left over, has said it will donate most of its surplus vaccine supply to poorer countries.

The Covax scheme is led by the WHO and also involves the Global Vaccine Alliance (Gavi) and the Coalition for Epidemic Preparedness Innovations (Cepi).

In a joint statement, the WHO and the United Nations children’s fund (Unicef) said it was a momentous occasion and “critical in bringing the pandemic to an end”.

Ghana – with a population of 30 million – has recorded more than 80,700 cases of coronavirus and 580 deaths since the pandemic began. These numbers are believed to fall short of the actual toll because of low levels of testing.

Though the vaccines are not generally intended for children, Unicef is involved in the scheme because of its expertise in procurement and the logistics of vaccine delivery.

The Covax scheme was set up by the WHO, the Gavi vaccines alliance and the Coalition for Epidemic Preparedness Innovations (CEPI) to try to prevent poorer countries from being pushed to the back of the queue.

The programme is designed so that richer countries buying vaccines agree to help finance access for poorer nations, too.

It hopes to deliver more than two billion doses to people in 190 countries in less than a year. In particular, it wants to ensure 92 poorer countries will receive access to vaccines at the same time as 98 wealthier countries.

It aims to reach up to 20% of the populations of poorer countries, at no cost to their governments.

Most African countries are intended recipients of Covax, but a number of them such as Senegal have been making provisions for vaccines outside the initiative.

Commenting on Wednesday’s first shipment, the Director-General of the WHO, Tedros Adhanom Ghebreyesus, said it was a major first step but just the beginning.

“We will not end the pandemic anywhere unless we end it everywhere”, he added.https://emp.bbc.com/emp/SMPj/2.39.19/iframe.htmlmedia captionThe chair of Gavi, the Vaccine Alliance, on the need for a worldwide effort on vaccinations

Covax has faced some criticism for not moving quickly enough. One WHO board member, Austria’s Dr Clemens Martin Auer, said it had been slow to secure vaccine deals and deliver doses.

The joint statement on Wednesday said the shipment to Ghana represented “the beginning of what should be the largest vaccine procurement and supply operation in history”.

Nana Kofi Quakyi, who is a health policy research fellow at New York University’s School of Global Public Health, told the BBC that Ghana would still struggle to compete with wealthier nations to make up the shortfall in doses it needed to find, even with the Covax initiative.

“The challenge that countries like Ghana are having is that in an open market, our bargaining power for bilateral deals is just not competitive against other wealthier countries that… in some cases, are buying more than they even need.”