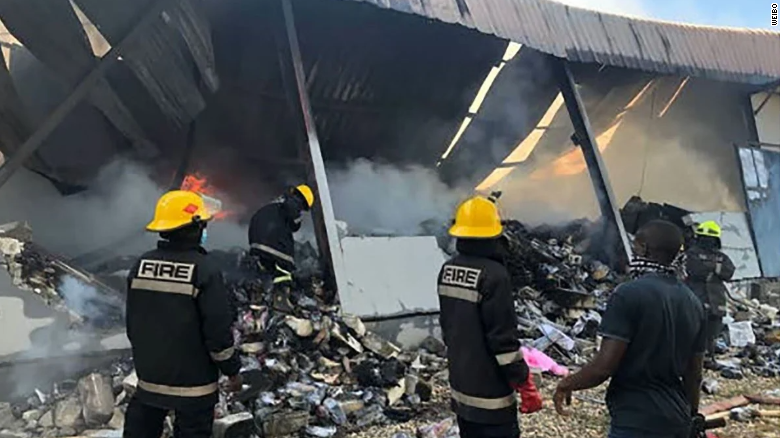 (CNN) – The trail of blood outside the warehouse door was the only immediate sign that a murder had taken place.

But CCTV footage seized by police, and seen by CNN, revealed a brutal afternoon of carnage.At midday on Sunday, May 24, three Zambian attackers with iron bars entered thegroundsof a Chinese-owned textile warehouse in Lusaka. Police said they were pretending to be potential customers.

But the trio did not want to do business.Over the next 17 minutes, the CCTV footage shows, they beat two men and one woman to death in the courtyard, before dragging their bodies into the adjoining warehouse.

That’s where the footage ends. According to police, the attackers then dismembered their bodies and used flammable materials from the Blue Star clothing business to set their bodies and the building ablaze, burning them so severely that it took Zambian authorities three days to retrieve their charred remains from the rubble.

Before fleeing, the attackers raided the propertyfor valuables. A blood-stained machete was found by police. 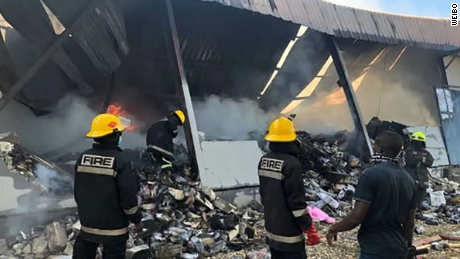 The burned out warehouse where the three Chinese victims’ bodies were found.The gruesome murder of 52-year-old Cao Guifang, the wife of the textile warehouse owner — who was in their home province of Jiangsu, in eastern China, when the attack happened — and her two male employees, Bao Junbin, 58, and Fan Minjie, 33, came at the end of a week when anti-Chinese sentiment in the Zambian capital was nearing boiling point.

In the days leading up to the murder, Lusaka Mayor Miles Sampa had accused Chinese bosses in the capital of “slavery reloaded,” used the derogatory term “Chinaman,” and, stoking racial divides, reminded the public in a video posted on his Facebook account that “black Zambians did not originate coronavirus. It originated in China.

“There are an estimated 22,000 Chinese nationals living in Zambia, operating 280 companies, mostly spread between Lusaka and the copperbelt in the north. Beijing owns about 44% of Zambia’s debt, which has led to fear among some Zambians that China has too much control over the country.

While police have not directly linked the murder to anti-Chinese sentiment, the crime came as a reminder of the violent outbursts some Chinese have faced while living in Zambia, a key partner for China along its coveted Belt and Road project.

“Even some of the people who stayed here for more than 20 years, they’ve also been shocked by such kind of criminal activities,” says Eric Shen, a Chinese businessman who has been living in Zambia for more than a decade.

Zambia reported its first coronavirus cases on March 18. As with much of Africa, the initial infections did not come from China, but Europe, after a couple who had recently returned from a trip to France imported the virus.

As the pandemic took its toll on Zambia’s economy, reports began to emerge that some Chinese businesses were defying the lockdown measures, either by continuing to serve Chinese customers, or by quarantining Zambian workers inside their premises.

Mayor Sampa began a campaign to expose such cases.On May 18, Sampa shut down a Chinese restaurant, which had reportedly denied Zambian patrons, for selling products labeled in Chinese and not English, as prescribed by the law. A few days later, he revoked the license of a Chinese barber shop for “discriminating against blacks.”

After those raids, Sampa posted video of himself bursting in on Chinese managers eating dinner at a truck assembly factory, where workers had allegedly been told to live on-site during the pandemic, and not return to their families, so they could keep working without risking getting infected in the community.

“We found Zambian workers made to sleep in a small container (six people in one container) with mattresses put on the floor,” Sampa wrote on Facebook.In the video, one Chinese manager responds: “We don’t allow them to go home because of the corona issue.”Sampa responds: “Chinaman … (there) is no excuse to enslave them.”On the same day, Sampa visited a cement factory, where he said workers had been held for two months.

When a Chinese boss explains in the video Sampa posted to Facebook of the visit that within the plant, all the workers were not able to go out, Sampa replies: “That is illegal. You are holding them hostage. That’s slavery.”

One Zambian employee at the cement factory told CNN: “We were asked by our (Chinese) bosses to stay and work from here until the coronavirus is over because they fear we might contract it from the community and bring it to our workplace. 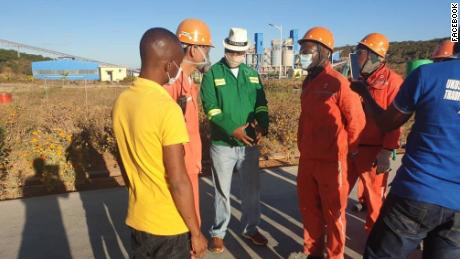 Mayor of Lusaka Miles Sampa asks staff at a Zambian cement factory about reports 100 Zambian workers have been prohibited from leaving the site during the Covid-19 pandemic.”But they provide us food, mosquito nests and mattresses where we sleep. We sleep like in a camp … but some of our colleagues who refused have been sacked and they will reapply once the company reopens.”Another Zambian employee of the same company claimed that his Chinese boss threatened to beat him if he refused to stay. “We were being forced by our Chinese bosses and they threatened to beat you if you refuse. That is how some of us ran away — right now, we just want the government to help us claim our unpaid salaries,” he said.When CNN contacted the factory, an employee who declined to give his name denied accusations of wrongdoing.”We are not holding them to be prisoners — we are just protecting them from this corona disease,” he said. “The workers are paid more for sleeping at the plant.”He would not say how much extra had been provided, but one employee said the workers are normally paid 1, 600 Zambian kwacha ($95) per month.

The Chinese presence in Zambia has been controversial for decades.In 2005, an explosion at a minenear Chambeshi, a town in Zambia’s copperbelt, killed dozens of Zambian workers. Five years later, two Chinese managers opened fire onZambian workers who were protesting bad labor conditions at the Collum coal mine. In 2012, Zambian workers killed a Chinese supervisor at the same mine.The incidents attracted global media attention and have often been held up as proof of poor Chinese labor standards — not only in Zambia but across the African continent.So when the issue of Zambian workers being forced into quarantine by Chinese bosses emerged during the pandemic, “it rekindled some of the old sentiment that people have had against Chinese employers,” says Kanenga Haggai, lecturer in the Department of Development Studies at the University of Zambia and PhD candidate at Southeast University, in China. “If not well handled, then it has the potential to ruin China’s relations with Zambia, on a people-to-people level.”Today, China trades more with Zambia than any other country in Africa bar Kenya. In 2018, bilateral trade was in excess of $5 billion.Yet while Zambian exports to China are considerable, thanks to its copper output, what many ordinary Zambians see on the ground is the pervasion of Chinese people and companies in their country. Major infrastructure projects including airports, highways and dams in Zambia have been built by Chinese state-owned, or linked, firms. 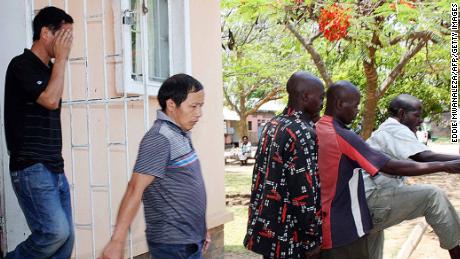 Wu Jiu Hua (L) and Xiao Li Shan (C), the two Chinese managers alleged to have shot 12 workers at Collum coal mine, leave the Choma Magistrate Court with other Zambian suspects on November 2, 2010 in Sinazongwe.

China also operates in the crucial mining sector, as do companies other foreign nations, and a Beijing-backed — although not owned — company even bought a 60% share in the Zambian state broadcaster.

“Zambians feel that China is slowly taking over their land, business, and that now Chinese people are given privileged treatment from the government officials,” says Haggai.

“We’ve seen a lot of Chinese are acquiring huge chunks of land.”

Chinese influence is a lightning-rod political issue in the country. In 2018, a Lusaka politician proposed building a China City, where Chinese expats would be restricted to doing their small business, after Zambians complained about foreigners engaging in their tradessuch as chicken rearing and running restaurants and salons, which have traditionally been their domain.

Before that, in 2006, the late Zambian politician Michael Sata claimed that 80,000 Chinese were “infesting” Zambia as he ran for the presidency on a xenophobic campaign, which led to racial attacks on Chinese-run workplaces.

Chinese shopkeepers had to barricade their storesagainst attacks by looters. The actual number of Chinese in the country is much lower.

While Sata had threatened to recognize Taiwan as an independent state before taking office, when he finally became President, on his fourth attempt in 2011, he embraced China as “Zambia’s all-weather friend” and abandoned his campaign promises.

Mayor Sampa is Sata’s nephew, and he likely understands how well taking a hard line on China will play with voters. 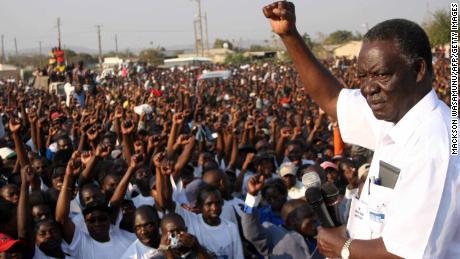 Michael Sata in 2006 during an address at a political rally.In a time of heightened racial tensions globally, Haggai says that Sampa should be cautious in the language he uses when talking about the Chinese presence to not stoke xenophobia.

“Of course, he has the mandate and the responsibility to check what is going on in the companies and factories in his jurisdiction, but he must be careful with what he says because this has become a very sensitive issue that might fuel further resentment against Chinese people,” he says.

After being advised to stay in his lane by central government authorities, perhaps mindful of Zambia’s economic dependence on China, Sampa issued an apology to the Chinese community.

He said: “I wish to apologies unreservedly … for the tone and language used towards one of their nationals in particular on the use of the word ‘Chinaman.’ I did not know hitherto that it was derogatory term, but they have since lodged in a formal complaint against my use of the word.

“Finally, I wish to assure all foreign investors in the city of Lusaka that my office is there to support their businesses 100% … we shall engage them in a more civil manner through relevant offices and institutions.” 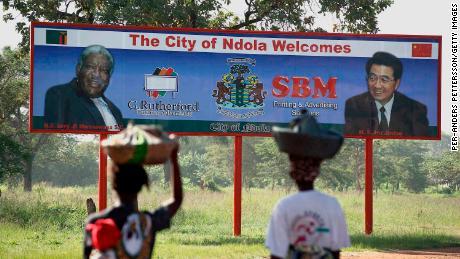 On Monday, hundreds gathered at the scene of the murder in Lusaka to pay their respects to the Chinese migrants who lost their lives. Zambians and Chinese stood side by side, wearing face masks, as they mourned the dead.

Zambian employees from the textile business said a few words, along with fellow Chinese expatriates, according to Eric Shen, the Lusaka businessman who was master of ceremonies.According to friends, Cao and her husband had been in Zambia for about 20 years, and from their warehouse they sold textiles, bedding and clothing they imported from Nantong, their home region of China which is known for textile production. 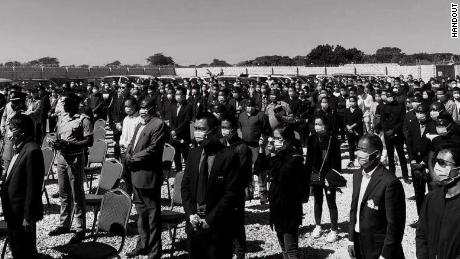 A memorial for the Chinese victims was held on Monday this week in Lusaka.

The Zambian ambassador to China, Winnie N. Chibesakunda, told state-run tabloid the Global Times that Zambia will strengthen measures to protect the lives of Chinese living in the country. In October 2015, three Chinese people were killed in a robbery in Kitwe, and in November 2017 a Chinese national died in an armed robbery in the copperbelt.

“The government of the Republic of Zambia has instituted investigations to bring the perpetrators of this gruesome act to justice and shall endeavor to continue strengthening measures to protect the lives of Chinese living in Zambia,” she stated. Zambian authorities have arrested two men and one woman on suspicion of murder.

Chinese Foreign Ministry spokesperson Zhao Lijian said that the murders were an isolated case that “won’t affect the mainstream of friendly cooperation between China and Zambia.

“Shen, the Lusaka-based businessman, concluded that, “these kinds of criminal activities can happen anywhere, any place, any time in this world.”

He said the Chinese community was trying not to link the killings to rising anti-Chinese sentiment, in a place where many have chosen to call home.