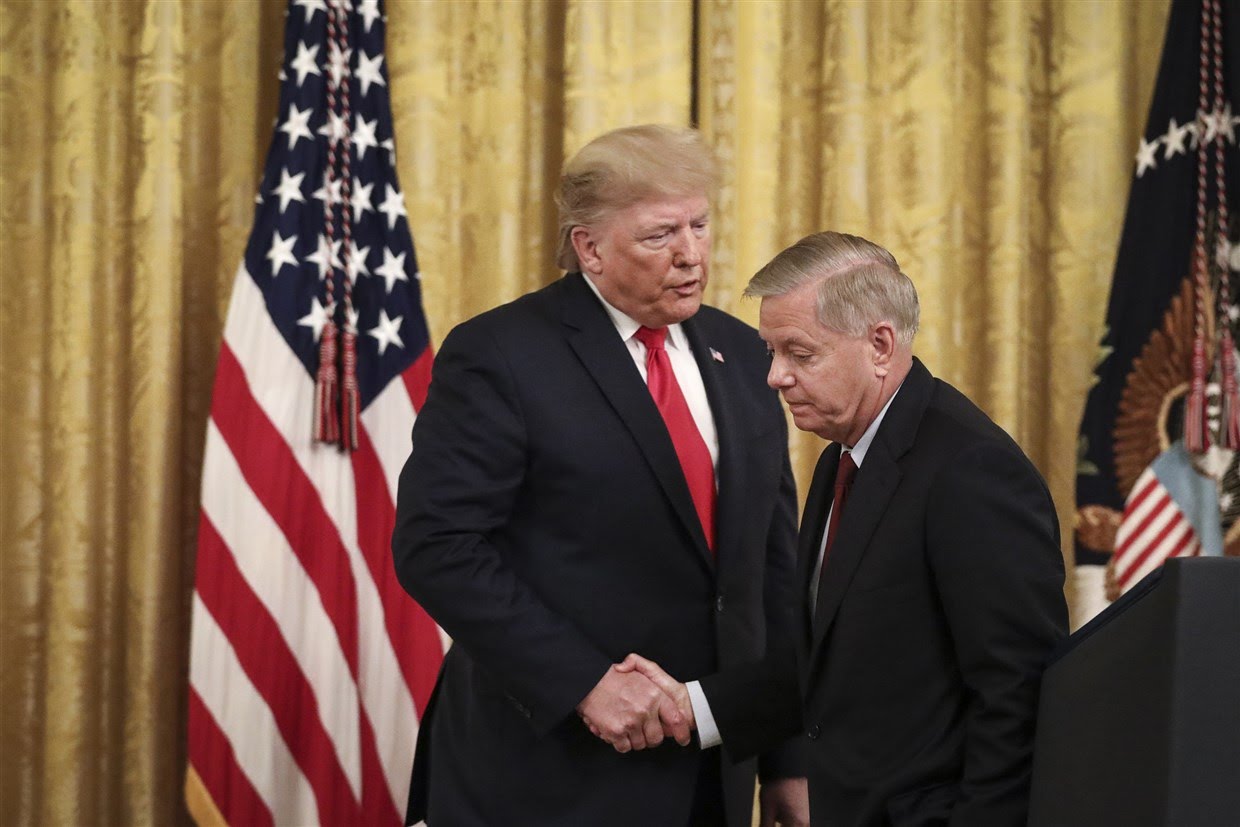 (msnbc) – Some Republican senators politely rejected President Donald Trump’s suggestion Thursday to “Delay the Election” beyond Nov. 3, indicating that the long-shot idea is dead on arrival in Congress.

“No, we are not going to delay the election,” No. 3 Republican Sen. John Barrasso, Wyo., said on Fox Business Network. “We’re going to have the election completed and voting completed by Election Day.”

Sen. Lindsey Graham, R-S.C., the chairman of the Judiciary Committee and a frequent Trump golfing partner, also gave the suggestion a thumbs-down. “I don’t think that’s a particularly good idea,” he said.

Graham added that he believed Trump’s “concerns about mail-in voting are valid, but delaying the election is not the right answer.”

Trump’s tweet came shortly after the United States announced it had suffered the worst economic decline on record in the second quarter of the year, with GDP contracting by 32.9 percent. Recent polls have shown Democratic opponent Joe Biden pulling ahead in national surveys and key swing states.

“The election is not going to be delayed,” said Sen. Thom Tillis, R-N.C., who faces a competitive re-election this fall. “We got to make sure that we have the resources and we don’t have the debacle that we’re seeing in, say, the state of New York. The election is going to happen in November, period.”

Tillis wouldn’t comment when asked if he thought mail-in voting was safe.

Absentee voter fraud is extremely rare in the United States, experts say. Many Americans have told pollsters they prefer to vote by mail during the pandemic.

The president does not have the legal authority to delay the election, with the Constitution giving Congress the power to set the date. Even if Republicans were to get on board with a delay, Democrats control the House of Representatives. And a hypothetical election delay wouldn’t extend Trump’s time in office — the 20th Amendment establishes a hard date of January 20, 2021 for the end of his current term.

“I’m concerned about election fraud,” said Sen. Ted Cruz, R-Texas. “But we should not delay the elections.”

Sen. Josh Hawley, R-Mo., laughed and shook his head and said “no” when asked about delaying the election.

Sen. Mitt Romney, R-Utah, the party’s 2012 presidential nominee, said “the election will be held on the date set by Congress, the historic date.” He also challenged Trump’s claims of potential fraud, saying: “With regards to mail-in voting — in my state, we’ve had it for some time. It works extremely well.”

Some Republicans avoided the question Thursday on Capitol Hill.

Sen. Rand Paul, R-Ky., asked if the president has the right to delay an election, responded: “I’ll get back to you.”

David Popp, a spokesman for Senate Majority Leader Mitch McConnell, R-Ky., re-tweeted a Kentucky-based reporter Thursday morning who wrote that the Republican leader “just told me over the phone that the election date is set in stone. He cited past crises taking place during an election.”

Biden predicted at a virtual fundraiser on April 24 that Trump would “try to kick back the election somehow, come up with some rationale why it can’t be held,” saying it’s “the only way” the president thinks he can win a second term.

On April 27, Trump emphatically rejected the notion that he would look to delay the election, calling it “made-up propaganda” from his Democratic rival.

“I never even thought of changing the date of the election. Why would I do that? November 3rd. It’s a good number,” Trump said at the time. “No, I look forward to that election.”