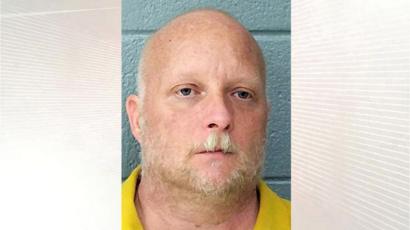 (BBC) – A US woman has been shot while trying to remove a Nazi flag from someone’s front yard in the state of Oklahoma.

Garfield County Sheriff’s office said the woman had been at a party nearby when she took one of two flags being flown outside Alexander Feaster’s home.

Mr Feaster, 44, then reportedly shot her in the back with a semi-automatic rifle as she ran away.

The 26-year-old woman is expected to recover from her injuries and Mr Feaster is being held in custody.

Sherriff Jody Helm said the woman was found lying in a ditch with four gunshot wounds after deputies responded to a call early on Sunday morning.

Sherriff Helm initially suggested the woman had tried to steal the swastika-emblazoned flag for a dare, but in an interview with NBC News she said there was “conflicting information” surrounding the woman’s motive.

An affidavit seen by NBC News says “several” cameras at Mr Feaster’s home show he fired on the woman “without warning”. A neighbour then moved a red pickup truck near the home to serve as a barricade, and a witness trained a rifle on the property as a precaution while waiting for deputies to arrive.

Mr Feaster was later taken into custody without incident. He has been charged with assault and battery with a deadly weapon, and shooting with intent to kill, and is due to appear in court on 9 July.

A neighbour told local radio KFOR that he had been flying the flags for around a year, and they had been snatched from his home a few times in the past. They added that he would occasionally dress up in black uniform with a red swastika armband – an outfit reminiscent of Nazi SS uniforms. But he was said to mostly keep to himself.

Another woman and friend of the victim said there had been “no problems” with Mr Feaster before, but that his flags were a cause for concern.

“I feel like these flags are a disaster waiting to happen,” she told the Enid News and Eagle.