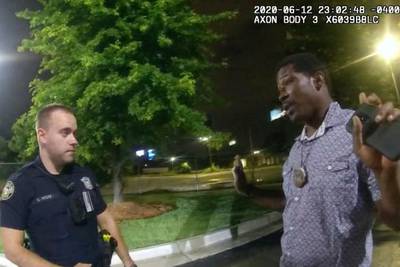 DA Paul Howard said he is charging Officer Garrett Rolfe with 11 counts including felony murder and aggravated assault, criminal damage to property and violations to his oath of office.

Officer Devin Brosnan is being charged with aggravated assault and two violations of oath of office.

Howard said the DA’s office was able to interview 10 witnesses to the shooting and watch eight videos that recorded the incident. Those videos included surveillance, body cam and personal cellphone video. They also viewed physical evidence including inspecting the crime scene, canvassing the area and examining the Tasers that were used prior to bringing these charges against the officers.

Howard said they concluded from witness statements and the videos that Brooks never presented himself as a threat.

We’re putting together all the information released in this afternoon’s news conference and getting reaction from Brooks’ family, on Channel 2 Action News.

Howard said following the shooting, the officers failed to give Brooks any medical attention for 2 minutes and 12 seconds.

“During that 2 minutes and 12 seconds, Officer Rolfe actually kicked Mr. Brooks as he laid on the ground, while he was there fighting for his life,” Howard said. “Officer Brosnan actually stood on Mr. Brooks shoulder.”

Howard said his office concluded at time of Brooks’ death, he did not pose a threat to the officers. He said Brooks was running away from the officers when Rolfe shot him in the back two times.

“We have also concluded that Rolfe was aware that the Taser in Brooks’ possession, it was fired twice, and once it’s fired twice it presented no danger to him or to any other persons,” Howard said.

“At the time the first shot was fired, the utterance made by Officer Rolfe was ‘I got him,;” Howard said.

Howard said Brosnan has now become a state witness, meaning he is willing to testify against Rolfe, but Brosnan’s attorney disputed that in a statement released after the announcement.

“To be clear – Devin is cooperating with the Fulton County District Attorney’s investigation. He met with the assistant district attorney and investigator yesterday and answered their questions. He turned over his phone. He is in the process of providing medical records and photographs of his injuries. He has NOT agreed to be a “state’s witness” or to testify in any court hearing or to plead guilty to any charge,” Brosnan’s attorney said.

Howard said his office is recommending no bond for Rolfe and a $50,000 bond for Brosnan.

Howard says this marks the 40th prosecution for police officers for misconduct in Fulton County and the 9th time they’ve prosecuted a homicide case against an officer.

The charges stem from the weekend police shooting that killed the 27-year-old father of three, who was found sleeping in a car in the drive-thru of a southwest Atlanta Wendy’s.

Brooks then pointed that Taser back at the officers. That’s when the video showed an officer firing three shots at Brooks, killing the 27-year-old father of three.

Since Saturday’s shooting, Howard’s office has been reviewing evidence.

The officer who fired the deadly shot, Rolfe, was fired from the Atlanta Police Department. The other officer, Devin Brosnan, has been placed on administrative duty.

Officer Brosnan’s attorney released the following statement after the charges were announced:

Devin Brosnan first wants to extend his condolences to the family of Rayshard Brooks. To his parents, his wife, his children, his extended family, his friends. It is clear that Mr. Brooks was greatly loved by many people.

When Devin initially responded to the scene he thought that Mr. Brooks had had a long day or possibly had a medical condition. As he responded to the call he did not, at the time, have any intention of arresting Mr. Brooks. Devin’s only intention was to investigate and get further information about the situation. During his encounter with Mr. Brooks, Devin treated him with respect, dignity, and concern for Mr. Brooks’s safety as well as the safety of the people nearby.

At the beginning of Devin’s interaction with Rayshard Brooks, Mr. Brooks was polite and affable. Mr. Brooks appeared to be impaired – either from a medical condition or possibly from alcohol. That is why Devin called for an officer specially trained in roadside evaluation to respond to the scene. Once the other officer responded – Officer Rolfe – it became Rolfe’s investigation. Devin was there to standby, to observe and assist if necessary. During Rolfe’s investigation it was apparent that Mr. Brooks was impaired; he was disoriented as to place and had trouble following Officer Rolfe’s questions.

Various videos from that evening have been widely circulated. Devin did not know that Officer Rolfe was going to arrest Mr. Brooks; Officer Rolfe did not communicate that to Devin verbally or otherwise. When Devin saw Officer Rolfe bring Mr. Brooks’s hands behind his back, Devin followed his training and moved in to assist Officer Rolfe. At that time, a struggle between Mr. Brooks and the officers started.

During that struggle, Devin pulled out his taser and warned Mr. Brooks to stop resisting or he would be tased. Devin never actually deployed his taser. Instead, Mr. Brooks took his taser from him and Mr. Brooks used it against Devin. Devin hit his head hard on the asphalt parking lot. He later received medical treatment and was diagnosed with a concussion at Grady. Devin also has burns from the taser, and other injuries. To be clear, at no time did Devin pull out his firearm.

After Mr. Brooks ran away, with Officer Rolfe in pursuit, Devin got up and followed. You can tell from the video that he is limping. What you can’t tell is that he was disoriented from the head injury. After Mr. Brooks was shot, Devin ran to the location where Mr. Brooks had fallen. Within a minute – less than a minute – Rolfe runs back to his car to get medical equipment, at the same time another officer arrives on scene. You can see on the video – at time stamp 23:24:59 – the officers tried to stabilize Mr. Brooks and gave first aid. Devin did what he could to save Mr. Brooks.

To be clear – Devin is cooperating with the Fulton County District Attorney’s investigation. He met with the assistant district attorney and investigator yesterday and answered their questions. He turned over his phone. He is in the process of providing medical records and photographs of his injuries. He has NOT agreed to be a “state’s witness” or to testify in any court hearing or to plead guilty to any charge. The decision to initiate charges by the Fulton County DA’s office is irrational and obviously based on factors which should have nothing to do with the proper administration of justice.

The attorney for Rolfe released the following statement Wednesday prior to the DA’s news conference:

“On June 12, 2020, a Wendy’s employee called 911 to report a man was passed out behind the wheel of his vehicle and blocking traffic in the drive-through. Officer Brosnan responded, and made contact with the driver, Rayshard Brooks. After determining alcohol may have been a contributing factor, he requested Officer Rolfe’s assistance. Officer Rolfe, a member of the High Intensity Traffic Team and the Governor funded HEAT Unit, has specialized training in DUI investigations. He has made at least 300 DUI arrests, and completed the 160-hour Drug Recognition Expert course, graduating as valedictorian. After a thorough investigation, Officer Rolfe determined Mr. Brooks was impaired and driving a vehicle in violation of Georgia law. Officer Rolfe was polite and courteous to Mr. Brooks during the entire encounter. Mr. Brooks was polite and cooperative until Officer Rolfe placed him under arrest.

“Suddenly, without warning or provocation, Mr. Brooks chose to violently attack two uniformed police officers. Officers Brosnan and Rolfe used the least amount of force possible in their attempts to place Mr. Brooks into handcuffs. They attempted to leverage him to the ground while giving him loud, clear verbal commands. In response, Mr. Brooks continued actively resisting lawful efforts to arrest him. He then escalated his resistance by punching Officer Rolfe in the face committing several counts of felony obstruction of an officer. See O.C.G.A. §16-10-24. In an effort to place Mr. Brooks under arrest and stop his assault, Officer Rolfe lawfully deployed his TASER twice, but it had no effect on Mr. Brooks.

Mr. Brooks continued his assault and disarmed Officer Brosnan, stealing his city-issued TASER committing a robbery, another forcible felony under Georgia law. See O.C.G.A. §16-8-40 & O.C.G.A. §16-10-33 . Mr. Brooks, then armed, began running through a crowded parking lot. Mr. Brooks was lawfully under arrest and Officer Rolfe pursued him. Officer Rolfe had deployed his taser and held it steady in hopes the prongs would catch onto Mr. Brooks body and neutralize him. Unfortunately, that didn’t occur.

“The loss of life in any instance is tragic. However, Officer Rolfe’s actions were justified under O.C.G.A. §17-4-20 and O.C.G.A. §16-3-21. A peace officer may use deadly force to 1. arrest a suspected felon when he reasonably believes that the suspect poses an immediate threat of physical violence to the officer or others, 2. to protect himself and others from a life-threatening injury, and 3. to prevent the commission of a forcible felony. Mr. Brooks violently attacked two officers and disarmed one of them. When Mr. Brooks turned and pointed an object at Officer Rolfe, any officer would have reasonably believed that he intended to disarm, disable, or seriously injure him.

“The Georgia Bureau of Investigation will complete an impartial investigation. Mr. Brooks’ family, the citizens of Atlanta, and Officers Rolfe and Brosnan, all desire a fair and thorough investigation including learning why Mr. Brooks suddenly turned violent. Officer Rolfe is well known to the courts and there is no compelling reason to bring any charges against them before the GBI has completed its investigation and published its findings.”