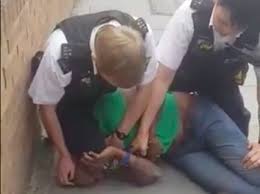 (BBC) – An officer has been suspended after footage emerged which appears to show police kneeling on a man’s neck.

Video recorded in Islington, London, shows two officers holding a handcuffed suspect, who is black, on the pavement.

A second officer has been removed from operational duty after the arrest on Thursday evening.

Deputy Met Police commissioner Sir Steve House said the footage was “extremely disturbing” and had been referred to the police watchdog.

‘Get off my neck’

The force confirmed it had arrested a man on suspicion of affray and possession of an offensive weapon.

In the footage, shared with the BBC, one of the officers appears to be using his knee to control the suspect and has his hand on his head.

The man on the ground, who is in handcuffs, repeatedly shouts: “Get off my neck.”

He is eventually released from the ground and continues to talk to officers after they sit him up.

Several police cars arrive at the scene after the arresting officers are confronted by onlookers.

‘Not taught in training’

An eye witness told the BBC: “I was worried he was going to get executed. That’s just how George Floyd got killed.

“If not for the crowds filming the police they could have suffocated him or broken his neck.

“He was on the floor and in handcuffs, what’s the reason for a kneeling on his neck?”

Sir Steve said: “The video footage that I have seen today and is circulating on social media is extremely disturbing.

“Some of the techniques used cause me great concern – they are not taught in police training.

The man has since been seen by a doctor, said Scotland Yard, which has referred the arrest to the Independent Office for Police Conduct (IOPC).

London Mayor Sadiq Khan said: “I’m deeply concerned about this distressing incident and we have raised this with senior officers at the Met Police as a matter of urgency.

“I welcome the fact the incident has been reviewed quickly by the Met and it’s right that they have referred it to the IOPC.”