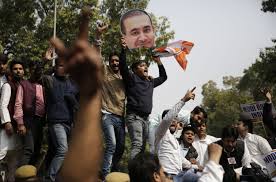 (AP) — Indian authorities have seized diamonds, pearls and silver jewelry worth millions of dollars as part of an investigation of a fugitive diamond merchant who is being held in London while fighting his extradition.

The seized valuables worth 13.5 billion rupees ($180 million) had been kept in a logistics company’s warehouse in Hong Kong after being taken there from Dubai in 2018, India’s Enforcement Directorate, which investigates financial crimes, said in a statement late Wednesday.

The jewels and gems belonged to Nirav Modi, whose jewels once adorned stars from Bollywood to Hollywood, and his uncle Mehul Choksi, who also fled India and is living in Antigua.

Modi is being held without bail. He was arrested by British authorities last year, more than a year after Indian authorities alleged he was involved in a $1.8 billion bank fraud. He left the country in early 2018 and started living in London.

Indian authorities have sought his extradition to face prosecution, claiming that the companies Nirav Modi controlled defrauded the state-owned Punjab National Bank by using fake financial documents to get loans to buy and import jewels.