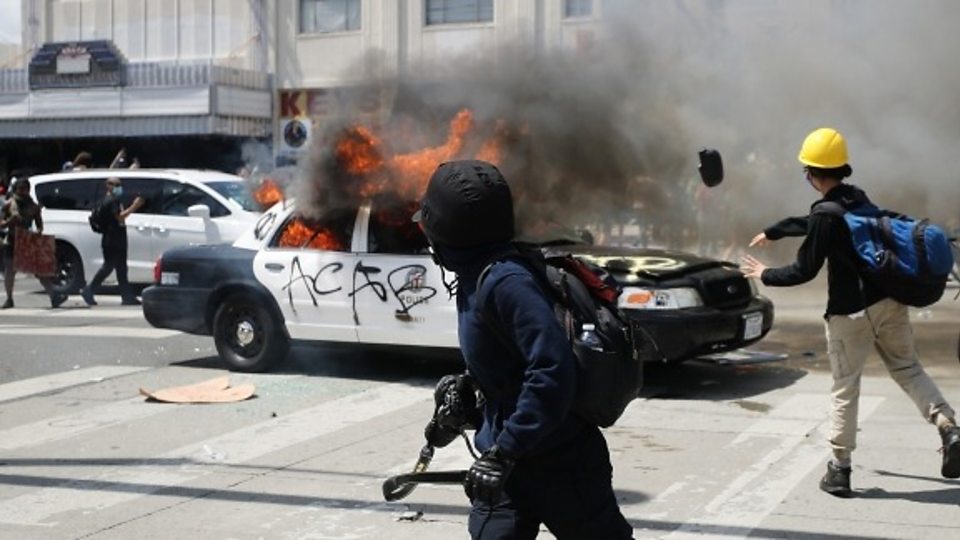 (BBC) – A lawyer for the family of George Floyd, whose death sparked unrest across the US, has accused a police officer of “premeditated murder”.

Minneapolis policeman Derek Chauvin has been charged with third-degree murder, but lawyer Benjamin Crump told CBS news it was a case of first-degree murder.

“We think that he had intent… almost nine minutes he kept his knee in a man’s neck that was begging and pleading for breath,” he said.

Several US cities have imposed curfews.

The Floyd case has reignited US anger over police killings of black Americans. It follows the high-profile cases of Michael Brown in Ferguson, Eric Garner in New York and others that have driven the Black Lives Matter movement.

Three other officers present at the time have also since been sacked.

For many the outrage over George Floyd’s death also reflects years of frustration over socioeconomic inequality and segregation, not least in Minneapolis itself.

In video footage, Mr Chauvin, 44, can be seen kneeling on Mr Floyd’s neck for several minutes on Monday. Mr Floyd, 46, repeatedly says that he is unable to breathe.

There have been five nights of arson and looting in Minneapolis and the adjacent city of St Paul. Minnesota’s Governor Tim Walz said on Saturday he was deploying the full Minnesota National Guard for the first time since World War Two.

Governor Walz said racism in his state had created the conditions for Mr Floyd’s death.

The National Guard – the US reserve military force for domestic emergencies – said on Sunday that 5,000 of its personnel had been activated in 15 states and Washington DC. It added that “state and local law enforcement agencies remain responsible for security”.

In the CBS interview, lawyer Benjamin Crump also said “we now have the audio from the police bodycam and we hear where one officer says ‘he doesn’t have a pulse, maybe we should turn him on his side’, but yet officer Chauvin says ‘no, we’re going to keep him in this position’. That’s intent.

“Also, the fact that officer Chauvin kept his knee on his neck for almost three minutes after he was unconscious.”

The lawyer also said Mr Chauvin and Mr Floyd already knew each other before Mr Floyd’s death in custody.

He said the Floyd family was “notified by the owner of a club that Derek Chauvin was an off-duty police officer where George Floyd was a security guard, and so they had to overlap”.

What’s the latest on the protests?

Huge demonstrations have taken place in at least 30 cities across the US. They were largely peaceful on Saturday, but violence flared later in the day.

One of the cities worst affected by unrest is Los Angeles. California Governor Gavin Newsom declared a state of emergency in the city and activated the National Guard.

The entire city is under a 20:00 to 05:30 curfew. Numerous shops have been looted, including on the famous retail avenues, Melrose and Fairfax, while overhead footage showed fires burning. Earlier police fired rubber bullets and hit protesters with batons. Hundreds of arrests have been made.

In Salt Lake City, a man aimed a bow and arrow at protesters and was attacked by the crowd, Reuters reported.

He also denounced the actions of “looters and anarchists”, accusing them of dishonouring the memory of Mr Floyd. What was needed, he said, was “healing not hatred, justice not chaos”. “I will not allow angry mobs to dominate – won’t happen,” he added.

Thousands took part in an anti-racism protest march in central London on Sunday, defying social distancing rules imposed because of coronavirus. They gathered in Trafalgar Square, then the crowd moved on to the US embassy.