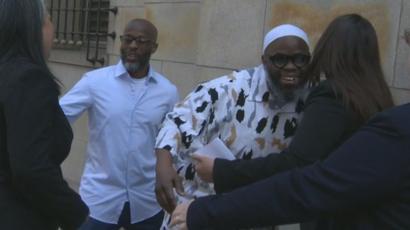 (BBC) – Two Baltimore brothers who served 24 years in jail for a murder they did not commit have each received $1.9m (£1.5m) compensation from the state.

Eric Simmons and Kenneth “JR” McPherson were released in May 2019 after prosecutors re-examined their cases and found errors by investigators.

It comes amid a national debate in the US over how to reform the police and criminal justice system.

Both men, who are black, had alibis for the 1994 killing.

They were in their early 20s when they were jailed for murdering a 21-year old man in East Baltimore, Maryland.

The Innocence Project, which worked to uncover new evidence in the case, says police pressured a 13-year-old suspect to identify Mr Simmons and Mr McPherson, and threatened the boy with murder charges if he refused.

Another witness, who was a paid police informant in a separate case, claimed to have seen the murder from her third-floor apartment, a distance of 150ft (45m).

Baltimore State’s Attorney Marilyn Mosby said on their release last year that Mr McPherson was at a nearby party when the shooting happened and that Mr Simmons was home in bed.

How have the brothers reacted?

Mr Simmons, 49, said that although he appreciated the money from the Maryland Board of Public Works, no amount can replace the time lost.

“My mother died in ’09, and I can’t get that back,” he told the Washington Post. “Money can’t fix the time I got jumped on and [guards] would beat me and put me in the hole. Money can’t fix that.

“I wake up every day and ask if it’s real,” he said, recalling times he would wake up in prison and think he was back home.

“If it was up to me, I wouldn’t have wanted to wake up after that. It was just God who put breath in my body.”

According to the Innocence Project, there are 30 exonerees in the state. Mr Simmons and McPherson are the ninth and 10th people to receive compensation for their wrongful conviction.