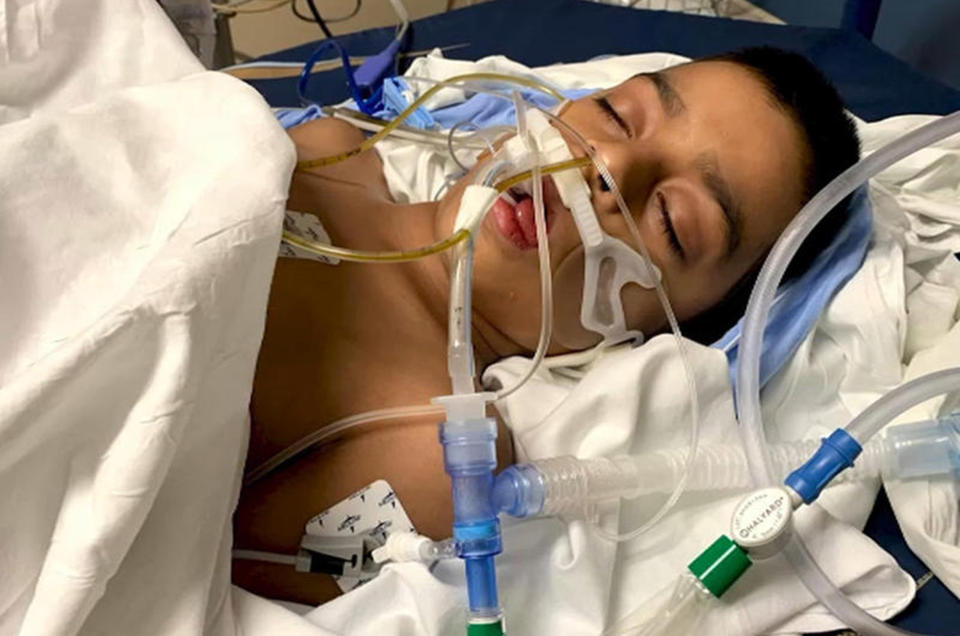 An 8-year-old Queens boy with no underlying medical conditions was diagnosed with COVID-19, put on a ventilator and suffered heart failure after initially coming down with a bout of diarrhea, according to a report.

Jayden Hardowar, of Richmond Hill, developed a fever and suffered from diarrhea in late April, so his parents took him to his pediatrician, according to WNBC.

His mom, Navita, said Jayden, who never showed any shortness of breath, took Tylenol and that his fever broke after a few days — but his dad, Roup, said the boy’s strength hadn’t come back.

“His body strength started to go down, he started to become a little bit weak,” Roup, a Con Ed worker, told the news outlet. “We followed up with his pediatrician, and they thought that he would come around, maybe because he wasn’t eating a lot.”

But on April 29, Navita became alarmed when Jayden called for her from his bed.

“I heard him call for Mommy. Jayden has a strong voice when he calls for Mommy, (but) his voice was very low,” she said. “That voice grabbed my attention.”

Navita said she noticed that Jayden’s head and hands were twisted in awkward positions.

“I quickly looked over at his face and his lips were all blue at that point, so right away I knew something was not right here with Jayden,” Navita said, adding that her son did not respond when she called out his name.

Jyaden was later transferred to Cohen Children’s Hospital in Nassau County, where he was put on a ventilator in the ICU and was unable to speak to his parents when they tried to video chat with him.

They said he suffered cardiac arrest and heart failure.

“It’s still a nightmare thinking of where Jayden is right now. Last week about this time, we were all together having dinner, playing, working from home, teaching from home, learning from home,” said his mom, a public school teacher.

“One of the scariest things as a mother, we’re at home thinking something like this will never happen to us,” Navita added.

The Long Island hospital conducted an antibody test, which found that Jayden had contracted COVID-19 at an earlier time.

Roup still isn’t sure how, though.

“None of us — six of us in the home: two adults, four kids — none of us had been sick. We’ve all been very strong and practicing our social distancing very diligently … we thought we were safe,” he said.

The rest of the family are waiting on their own test results to see if Jayden could have been infected from any of them.

Three days after being rushed to the hospital, Jayden was taken off the ventilator over the weekend and his parents hope to have him home soon.

On Monday, top medical experts around the world identified a new syndrome in children linked to coronavirus inflammation that can cause shock and organ failure.

The symptoms are similar to toxic shock syndrome and/or Kawasaki disease, an autoimmune illness that can be triggered by a viral infection and, if not treated quickly, can result in life-threatening damage to the arteries and the heart.

Fifteen kids in the Big Apple have been hospitalized with the inflammatory syndrome, health officials said in an alert Monday night.

Jayden’s parents said the mystery surrounding COVID-19, and what it can cause, is what makes it such a terrifying illness.

“The fact that we don’t know enough is very scary,” Navita said. “It’s a moment I don’t ever want to relive or would like any parent to experience.”

Doctors are advising parents to watch for symptoms including fever with a rash, red eyes and abdominal pain.

“He was a little kid, lying in bed with his mom — and then he went into cardiac arrest,” Roup said about Jayden. “A cardiac arrest could have been avoided if we were in the hospital earlier and (caught) it earlier.”